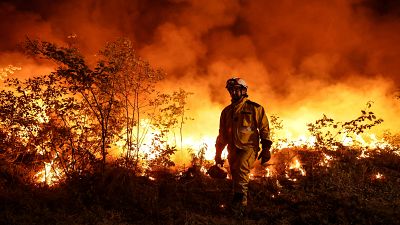 Tactical firefighters (wearing yellow gear) set a backfire to a plot of land to prevent the wildfire from spreading in Louchats, south-western France, on July 17, 2022.   -   Copyright  THIBAUD MORITZ/AFP or licensors
By Maeve Campbell  with Reuters  •  Updated: 20/07/2022

Europe is baking in a heatwave that scientists confirm is due to escalating climate change.

Temperatures in the UK hit 40C for the first time in recorded history this week, while France, Portugal, Spain, Greece and Croatia have been battling wildfires for weeks.

Records are usually broken by fractions of a degree, but the 40.2C recorded at London’s Heathrow airport is 1.5C higher than the previous 38.7C in 2019 in Cambridge.

"We hoped we wouldn't get to this situation but for the first time ever we are forecasting greater than 40C in the UK," climate scientist at the British Met Office, Dr Nikos Christidis, said in a statement.

In Spain, a man who was trapped in a wildfire escaped with his clothes on fire after attempting to prevent the blaze from reaching the town of Tabara on Monday. Known locally as Angel Martin Arjona, he was driving a digger towards the fire in a field on the outskirts of the town when the vehicle was engulfed in flames.

Seconds later he was seen running from the fire, tripping and scrambling to his feet before flames could be seen on his clothes.

Passengers in a Spanish train were also forced to watch as a wildfire tore through vegetation near the track in Zamora. The train was travelling between Madrid and Ferrol in the Galicia region, the passenger who shot the video, Francisco Seoane said.

In Portugal, half the municipality of Murca was on fire and the bodies of an elderly couple trying to flee were found inside a "completely charred vehicle," the mayor told local broadcaster SIC.

Temperatures in Portugal hit 47C (116F) on Thursday - a record for July.

Wildfires in France in recent days forced over 24,000 people to flee their homes, with emergency shelters being set up for evacuees.

Gironde, a popular tourist region in the southwest, was hit particularly badly, with firefighters battling to control fires destroying over 34,000 acres of land.

“I think we can very confidently say that every heatwave occurring [] has been made more intense and more likely because of climate change,” Dr Friederike Otto, a senior lecturer in climate science at the UK’s Grantham Institute for Climate Change and the Environment, told Euronews Green.

Watch the video above to see more about the wildfires.