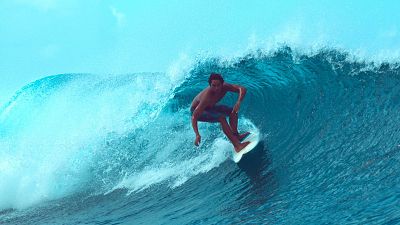 The next Olympic games will take place in Paris in 2024. However, it’s just been announced that the surfing competitions are going to take place a little further away from the French capital than you might expect…

15,716 kilometres away to be precise, in the village of Teahupo’o on the island of Tahiti in French Polynesia.

It’s around a 20 hour flight to Papeete, the island’s capital. After that visitors need to cross through the rural areas of Tahiti’s jungle to get to the southern part of the island.

By all reports, this tiny remote village is worth the journey for expert surfers as it’s regarded as one of the best places in the world to catch a wave.

Is Tahiti part of France?

French Polynesia is made up of 121 islands and atolls. Tahiti is where most people live with the island accounting for around 70 per cent of the total population.

Technically speaking, French Polynesia is classed as an overseas collectivity of France meaning it’s just like any other department of France but it does have some autonomy - including having their own President.

Why is French Polynesia hosting a Paris Olympic event?

Teahupo’o is a village with a wild coastline and is practically unknown to travellers outside the surfing community.

However, it’s not a spot for those trying the sport for the first time. Waves can be ferocious and reach heights of over 10 metres, though ideal conditions are between three and four metres.

"Surfing this wave means taking risks", explains Kauli Vaast, one of the best Tahitian hopefuls, who intends to qualify for the Games.

He loves it though, describing his feeling of connection to the ancestral spiritual force, Mana and the elements when he surfs.

"When you ride this wave, you see the turquoise water and the corals just below, the happy people on the boats, the mountains and the sunrise in the pipe right in front of you: perfection," he says.

The name Teahupo’o means ‘cut off heads’ in Tahitian. Although the name isn’t actually connected with the wild seas, it has helped to reinforce its image as a spot not for the faint hearted.

Though locals are excited to host the games, they also hope to be able to continue their way of life. One of their key philosophies is to live in a way that leaves as little an impact on nature as possible.

Watch the video above to learn more about this tiny surfing village.