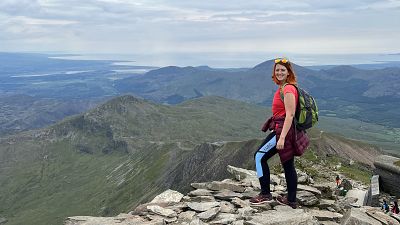 I’ve spent time living in England, Scotland, Switzerland and Russia. So you might find it surprising that despite my extensive travels, I had never been to Wales.

It’s just less than a three hour drive from my hometown to the Welsh border so I don’t really have any good excuses for why I hadn’t been.

When a friend of mine suggested that we climb Mount Snowdon together, I jumped at the chance.

Not only because it was another peak to tick off my list but because it meant I’d finally venture into Wales.

Mount Snowdon, or more precisely, Yr Wyddfa is the second highest mountain peak in Britain at an altitude of 1,085 metres.

I climbed England’s highest mountain, Scafell Pike about 10 years ago with my dad and so Snowdon felt like a perfect natural progression. (If I eventually decide to climb Ben Nevis - Scotland’s and Britain’s highest mountain - that’ll be Britain’s ‘three peaks’ completed.)

Myself, two friends and a little dog named Bella, bundled into the car in Manchester one sunny morning this summer.

It was just over a two hour drive from there, along beautiful coastline, to where we had decided to start our hike.

How to climb Yr Wyddfa

There are six main paths to the summit of Mount Snowdon. According to Visit Wales, the Llanberis path is the easiest and recommended for first time visitors to the mountain. It is, however, also the longest route at around 14.5km.

It’s absolutely vital to pre-plan your route according to the ability of everyone in your group as each path varies in difficulty and terrain enormously.

One of the most popular places to park is the Pen y Pass car park at Llanberis but don’t forget to pre-book it in advance. All the spaces were filled up several days in advance when we went, so we ended up choosing a different route and parking elsewhere.

The route we took on the way up was the Rhyd Ddu path. It’s a 12km trek but one of the quieter trails and for the most part, has fairly manageable terrain.

It’s only towards the top where there are two slightly trickier spots. The first was a section which required some scrambling - if you’re not nimble enough to climb up rocks, I’d steer clear of this route.

The second was a narrow path with very steep drops on either side. Though the views were incredible, this section did give me the willies a bit. Thankfully this doesn’t go on for too long and my shaky legs quickly became sturdy again. A good reminder that, if you haven't got a head for heights, this isn’t the path for you.

What to pack to climb Mount Snowdon?

I very stupidly, accidentally left my walking boots at my friend’s house so ended up doing the climb in my trainers. Though they did provide me with enough grip (it was a dry day) and were comfy, some parts of the route were boggy so by the end of the day my shoes, socks and feet were incredibly wet. Think six-hours-in-the-bath level of wrinkly toes.

We were really lucky with the weather on the day we climbed but it’s important to check conditions before you go as it may be too risky to attempt the summit.

For much of the day I wore a sporty tech-fabric t-shirt and a down jacket. I also made sure to pack extra layers, including a waterproof and a bobble hat into my backpack. I didn’t need either fortunately but you’ll be surprised how cold you might get when waiting at the top or stopping for a picnic.

To keep myself full of energy I opted to pack lots of snacks to graze on throughout the day, rather than just a single sandwich for lunch. Cake, fruit, crisps, crackers, scotch eggs and cocktail sausages really hit the spot.

But what was vitally important was water. I took my large 800ml bottle and frankly it was only just enough. On the descent down, I rationed my water and only finished it off when I knew we were close to the car. If you can, I’d recommend packing more than that.

Once we got to the bottom, we popped into a pub to revitalise ourselves with a large soft drink (honestly, it wasn’t beer!) and some more snacks.

What not to do at Mount Snowdon

Although there is a rough estimate of how long it might take to climb each route up Snowdon, make sure you allow extra time in case you need more rest stops along the way.

You’ll also find that it may be very busy at the top. Although the Rhyd Ddu path was quiet, at the summit there was a queue for at least 30 mins to take a photo with the cairn. You don’t want your Instagram photoshoot to be the cause of you walking in the dark at the end of the day.

It took us around 3 hours to get to the top. We then waited 30 minutes in a queue for the cairns before sitting down for a picnic.

Poor little Bella was getting a bit tired but just like us, after a sit down and some snacks, she was ready for the descent.

On the way down, we decided to take the Snowdon Ranger path to avoid having to climb back down the scramble section of Rhyd Ddu. Once we were near the bottom, we could see our car in the distance and so decided to take a ‘short-cut’ across a field.

Reader, this was not a shortcut. It took us around 3hours 40minutes to reach our car. Don’t be like us, stick to the paths.

If you’ve heard anything about Snowdon before, you may know that there is a train to the top.

However, it is currently not running all the way to the peak, and won’t be until 2023. So if you’re going to climb Snowdon this year, you’ll have to do both ways on foot. I quite liked the idea of getting the train down and spending the afternoon in the pub but alas it wasn’t to be.

Additionally, because the train isn’t running all the way to the top, the toilets at the summit are also not open. Make sure you get comfortable before you set off and then if you need to go whilst walking, you’ll have to do what I like to call ‘a wild wee’.

Is it worth climbing Mount Snowdon?

We were incredibly lucky with the weather the day we went - the sky was clear and so we could see all across Wales, Anglesey and even the Isle of Man.

The landscape is incredible shades of green and my friend likened it to that of New Zealand.

On the way home, we stopped into Betws-y-Coed for some dinner. It’s a beautiful little town and really worth the visit if you have time. Plus the drive from Rhyd-Ddu takes you past even more wonderful landscapes.

Including the 2 hour drive each way, it ended up quite a long day but for the incredible views, the endorphins of the hike and time spent with good friends, it was definitely a day out worth doing.

Watch the video above to learn more about climbing Mount Snowdon.