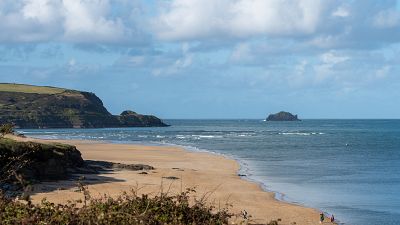 The UK is one of the most visited countries in the world but a lot of tourists never make it outside of England’s capital, London.

There’s much more to any nation than just its capital city, though. A whole host of different experiences can be had in the four countries that make up the UK: England, Northern Ireland, Scotland and Wales.

I am a Euronews journalist, writing for Travel and Living. I am from the south-east of England and have travelled all over the UK. So I’m here to guide you through all the must-sees, according to a local.

Top 10 must-see places in the UK

When to visit the UK

The weather is pretty mild in the UK if a bit rainy making it a great place to visit at any time of year. I'd recommend autumn as an ideal time to make a trip, though. It is still relatively warm and dry but UK schools are back in session meaning top attractions are a bit less busy.

The best way to travel around the UK

The UK is pretty flat and I would recommend making the most of that by travelling on foot. It’s the most cost effective transport, after all!

There are over 200,000 km of footpaths that crisscross the country, winding their way through rolling hills, dramatic coastlines and ancient forests. They are well-maintained and connect up all the big towns and cities.

For distances that are too far to cover on foot, trains are a great option. They are very reliable and run on time most of the time - if they are delayed by more than one hour you can get a part or full refund.

More than 2,500 stations make up the country’s railway network and you can reach most places from London in just a few hours. It’s best to book yourself a seat if you are travelling during peak hours or for long journeys. Make it a window seat if you want to get a glimpse of some scenic views as you chug by.

You can book travel for all routes here.

Off the beaten track

I’m definitely not just recommending this stretch of dramatic coastline because I am a surfer and it is one of the best locations to catch a wave in the UK. The north Cornish coast has been a favourite of royals and prime ministers in the past. It’s also a great place to sample some British seafood with several Michelin starred restaurants to choose from, or cheaper options at local fish and chip shops- call them chippies if you want to fit in with the locals.

Most tourists head for Edinburgh or Glasgow. But Aberdeen has a lot to offer. The North Sea port city is easily explorable on foot. It features some incredible historic architecture and the local granite used for their construction gives it its “Silver City” nickname. The only downside - you might find locals’ accents a little tricky to understand.

An hour and a half to the west of the city is the Cairngorms National Park with its mountains, lochs and distilleries where you can learn about the world-famous Scotch whisky.

Major experiences that you shouldn’t miss

Touring the Tower of London

A UNESCO world heritage site, the Tower of London is a world-famous London landmark. It has been the setting for the execution of three English queens. The Tower is also where the UK’s Crown Jewels are kept and visitors can see this magnificent collection of 23,578 gemstones.

Walking out to St Michael’s Mount

This castle is located on a tidal island 500 metres off the Cornish coast. Separated from the town of Marazion by the sea, the island is only accessible on foot during low tide. The castle has been a family home for centuries and is full of stories from different centuries of British history.

Stratford-upon-Avon is the birthplace of the bard and you can visit the home that William Shakespeare grew up in. There are costumed tours and exhibitions in the fabulously preserved Tudor house. The Royal Shakespeare Company is also based in the town so you see some of the famous playwright’s best work while you are there.

What can I do for free

One of the things tourists visiting the UK love the most is that all national museums and collections are free in the UK. So without spending any money you can see works by world-renowned artists, ancient artefacts or take a look at the Grant Museum’s infamous jar of moles. You can book tickets for some exhibitions.

For well-known attractions, especially in London, get there early to avoid experiencing the great British pastime of queuing. If you enjoy the experience, consider making a donation on your way out - they keep these attractions going.

Nowhere in the UK is more than 2 hours from the coast making a trip to the beach a good low-cost activity wherever you are staying. It might be cold and wet but there are some real isolated gems if you are into watersports, wildlife watching or even just exploring dramatic, windswept stretches of sand. As they say, “there’s no such thing as bad weather, only bad clothing.”

You will likely have fish and chips on your must-eat list but there is a lot more on offer in the UK than just pure carbohydrates. Chicken Tikka Masala is widely considered the country’s national dish and curry is firmly at the top of my list of things you should try.

Fans of Indian, Pakistani and Middle Eastern foods should make the trip up to Manchester’s Curry Mile. It’s home to an impressive number of restaurants and world food markets.

As the UK is a huge melting pot of cultural identities, you’ll find a range of cuisines in most places, even small towns and villages. You’ll likely be able to eat the food you would at home, if that’s what you fancy.

There are around 25,000 bed and breakfasts across the UK and they often offer better value than staying in a hotel. If you aren’t familiar with the idea, these are small, independently owned lodgings that provide you with exactly what they say on the tin; a bed and some breakfast.

B&Bs are often the owner’s home so it’s a great way to meet local and get their tips on the best places to visit in the area. They can be a bit quirky and quaint so make sure you check the conditions of your stay thoroughly before booking. Great if you love a homemade breakfast and the chance to have a chat with your fellow guests.

If you are visiting East London’s Brick Lane, it is worth stopping by Beigel Bake. It doesn’t look much from the outside, but I’ve travelled for hours in the past just to pick up a dozen of their fresh-baked bagels.

Borough Market is always a busy favourite for tourists but if you take a walk just a little way down the road you will come across The Gentleman Baristas. It is one of my top places to get a coffee in the entire city.

Down on the north Cornish coast, Trebarwith Strand is a location I have to go on every visit. Only two miles from Tintagel, it is quiet compared to some of the other beaches in the area. Plus the tiny village has freshly made doughnuts and local beer.

Another north Cornwall favourite is The Buttermilk Shop in Padstow. They sell traditional fudge all over the UK now but I’ve been visiting the tiny sweet shop tucked away in the winding streets of the fishing port since I was a child.

A guide to the Isle of Skye: Mountains, magic and mist

Will Harry and Meghan’s revelations reduce visitor numbers to Britain?