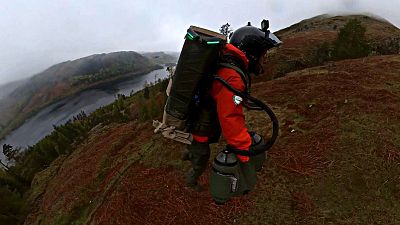 Did you ever think you’d see a jet suit flying in real life? I didn’t and certainly not in the Lake District.

Helvellyn is the third highest peak in the UK’s Lake District. Every year millions of people flock to the region to climb its mountains. But what if something goes wrong?

The Great North Air Ambulance Service (GNAAS) is a charity that provides incredible helicopter rescue but when the weather gets rough, a helicopter can’t always make the journey.

Richard Browning from Gravity Industries, a British aeronautical innovation company, has the solution.

Jet suits are the speediest way to reach people in need

After just six days training, Jamie Walsh, a paramedic for GNAAS used one of Gravity’s Jet Suits to fly up Helvellyn for the first time ever.

The journey, which would normally take around 1 hour 20 minutes on foot, was cut down to just 3 minutes and 30 seconds via jet suit.

“If you’re a cardiac patient or somebody that really needs critical care, 1 hour 20 minutes is often too long for really important cases,” says Richard Browning, founder and chief test pilot at Gravity Industries.

“We can get a trained professional very quickly to the side of a casualty in very difficult weather or very difficult physical terrain in a way that often [rescuers] on foot, or a vehicle or a helicopter can’t do.”

This is an enormous step for search and rescue and, in the grand scheme of things, it hasn’t taken Gravity Industries all that long.

“Back in 2016, I hatched this unusual vision of ‘Could you reimagine how human beings could fly?’,” explains Richard.

How does a jet suit work?

Gravity’s 1,000 horsepower jet suits work with thrusters on the pilot’s back and two small jet engines on each arm forming a stable tripod shape of power.

According to Richard, after several years of development, the suits no longer require a large amount of upper body strength. He likens the feeling of using one to leaning onto a table with straight arms.

So far more than 500 people of varying size and fitness have all learnt to fly the jet suits. Some have even mastered it in just a day.

The jet suits can be powered by either diesel, jet fuel, bio-diesel or bio-jet fuel.

What’s next for jet suit travel?

Gravity Industries has already developed an electric Jet Suit. Right now, there isn’t suitable battery technology in existence and so the suit is twice the weight of the regular version and so doesn’t perform as well. But as soon as the batteries can be made small enough, Richard says he has a suit ready to go.

Richard also plans to test the suits in a variety of other rescue scenarios, including during avalanches.

People caught in avalanches often die of suffocation as they’re trapped under the snow. Although there is an emergency beacon system in place, it’s hard to get a rescue team directly above them to start digging them out quickly.

“I’ve got a very strong hunch we can get directly over the top of that victim and even use the thrust to blow away a lot of the snow before then digging,” explains Richard.

“So we’ve got to prove it but I have a strong suspicion we can really help in that area as well.”

Watch the video above to see this incredible jet suit in action.