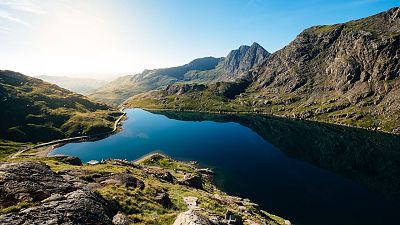 “Wales - is that in England?” they’ll ask me on my world travels.

Not quite. Wales is a Celtic country located within the United Kingdom, west of England and overlooking the Irish Sea.

I was five when we moved into our family home, making sure to secure the very best view for myself: a panorama of the Eryri mountain range. Even as a child I never took it for granted, the snow-capped peaks remaining white like icing sugar well into the month of May each year.

Right now, there’s a conversation happening about whether park authorities should refer to the country’s tallest mountain by its Indigenous name Yr Wyddfa. The name

represents the grave of the giant Rhita Gawr, slain by King Arthur and buried on the mountain.

The past: A history of Wales

In order to understand why Yr Wyddfa’s more recognisable name ‘Snowdon’ is problematic, it’s important to know our history. Wales first became an English colony in the 13th century, before being officially incorporated into the kingdom of England in the 16th century.

While the Welsh name for our land, Cymru, refers to ‘friends’ or ‘fellow countrymen’, ‘Wales’ derives from an Anglo Saxon word meaning ‘foreigners’ or ‘outsiders’.

A 1847 report referred to by the Welsh as the Treachery of the Blue Books presented Welsh speakers as stupid, unruly and sexually promiscuous. As a result, school children between the 18th and 20th centuries caught speaking Welsh were forced to wear a heavy wooden plaque—reading W.N, or Welsh Not - around their necks.

The child wearing the plaque at the end of the day was beaten.

Despite today receiving equal status to English within Wales, it clearly does not enjoy the same level of respect from Westminster.

Despite today receiving equal status to English within Wales, it clearly does not enjoy the same level of respect from Westminster.

In 1965, the village of Capel Celyn - one of our last exclusively Welsh-speaking communities - was drowned to provide England with drinking water. Despite deriving from the ancient Brythonic, making it one of Britain’s oldest languages, Welsh is still referred to as “foreign” within Westminster.

The present: What about now?

As of the 2020 Annual Population survey there were 883,600 Welsh speakers in Wales, equating to 29.1 per cent of the population.

Despite these not-insignificant numbers, the Welsh language is treated with contempt. In February, a National Health Service boss compared the treatment of non-Welsh speakers to Black people during South African “apartheid”, while the boss of a national supermarket chain referred to the language as “gibberish”, having previously claimed it was a “dead language that sounds like someone with bad catarrh clearing his throat”.

Welsh has also long been the go-to gag for a London-centric British media. On UNESCO’s International Mother Tongue Day a language expert was left “speechless” when a Sky News presenter asked whether Welsh was the most “pointless” language.

The contestants of comedy quiz show Have I Got News For You, meanwhile, compared the use of the name Yr Wyddfa to deadnaming transgender people.

Anecdotal responses to the Wyddfa conversation have been incredibly disheartening. While bigotry was veiled by faux concern for our tourism industry - how will they even find this enormous mountain if signs are in Welsh? - there was also the usual gaslighting.

“Snowflake! We’re in the middle of a pandemic and you’re complaining about this?” Many others declared, “Well it will always be Snowdon to me.”

It hurts when something as integral to my identity as my language is invalidated. The most disappointing culprits, however, have been the British travel media. One journalist attempted to correlate the use of Welsh onboard flights with plane crashes, questioning whether there was need for “more guff” for pilots to “wade through” before concluding it wouldn’t cause “any harm” if the Welsh were eliminated from proceedings.

The most offensive was the writer who claimed the Welsh aren’t deserving of our mountain’s Indigenous name ‘because we had the audacity to place a train on it’.

Another, meanwhile, ruined a perfectly pleasant piece by comparing Welsh place names to a “cat walking across a keyboard”.

But the most offensive was the writer who claimed the Welsh aren’t deserving of our mountain’s Indigenous name ‘because we had the audacity to place a train on it’ - you know, the train that allows the young, elderly and infirm to enjoy our spectacular views, not to mention transporting Mountain Rescue up when helicopters can’t land.

The Anglicisation of traditional Welsh names is nothing new. Another example within the national park includes that of Llyn Bochlwyd - literal translation, Lake Greycheek, named after a grey stag which leapt into its waters to evade hunters.

In some travel guides it has been renamed Lake Australia.

“Welsh is a language attached keenly to place. Welsh belongs to all of us in Wales, of all backgrounds and regardless of one’s ability to communicate in the language,” according to Elin Hywel of Cymdeithas yr Iaith [the Welsh Language Society].

“With this in mind, there is no reason for the English translation of ‘Yr Wyddfa’. The highest mountain in Wales has always been called ‘Yr Wyddfa’; steeped in local and national history, it is a name in which all of us in Wales can take pride. Maintaining the given place names is one way we can thread the memory of our communities over the chasm of time itself, and it is a privilege to maintain the richness of our communities, our history, culture and our love in this simple way.”

The future: Will we ever be recognised?

While Wales has some devolved powers, it ultimately remains under British rule. However, a recent poll put support for independence at a record 39 per cent, excluding 'don't know' answers.

Moving forward, Wales needs to set its sights on a higher quality of tourist; a tourist that will celebrate what makes us unique instead of picking and choosing the parts which are convenient.

A world that can get used to Uluru instead of Ayers Rock can also get used to Yr Wyddfa. As an adult I’ve come to terms with the shame I once felt about my language, and now I’m ready to yell it from the mountaintop*.

* which I reached by train, obviously.

This article has been amended to include a clarification. A previous version said that a recent poll found that Welsh independence had support of 39 per cent. This figure is correct after excluding the 'don't know' responses.

Meet the twins opening a restaurant inside an aeroplane

Sport climbing: The best courses in Europe for beginners

Boris Johnson: We need to get the travel industry moving again