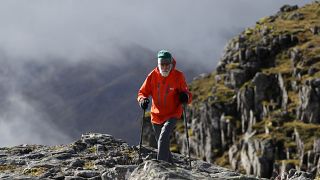 Nick Gardner dusted off his childhood dream and learned to climb at the age of 80 - all for a very special reason.

After 30 years of marriage, his wife was diagnosed with Alzheimer's in 2018. Gardner was devastated.

"When it got too much for me to handle, when she went into hospital and care...I just didn't know what to do,” he explains. “We've been used to each other's company 24/7 for 30 years. And then suddenly it's gone," he said.

It was then that Gardner decided he needed a challenge to help him cope.

I need my hat and gloves on, and my windproof jacket, but it's absolutely magnificent.

The task he set himself would be difficult for many people even half his age. In the space of 1,200 days, he wanted to climb all 282 of Scotland's 'Munros', or mountains taller than 900 metres. Now on day 636, he is halfway through having just completed his 220th climb. In honour of his wife Janet, Gardner is raising money for the charities Alzheimer Scotland and the Royal Osteoporosis Society.

The task he set himself would challenge many half his age - to climb all 282 of Scotland's 'Munros'.

"I think [it was] the third mountain I climbed where I just happened to be chatting to other climbers and I just happened to mention what I was doing for this challenge. And they couldn't believe it.," he says. “They were amazed.”

"Obviously, I thought, I've got something here. I really have. And I didn't realise the potential. And so ever since then, when I see people on the hill, I stop them and have a little conversation with them, tell them what I'm doing."

Watch the video above and hear what Nick has to say about his challenge.