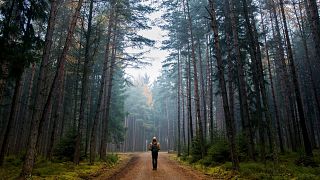 We’ve all dreamed of downing tools and walking off into the wilderness to explore the great unknown.

And while the boss may not approve, the wilderness doesn’t have signal, right?

The truth is, we all need a bit of time by ourselves every once in a while - and that’s exactly what luxury travel agency Black Tomato are offering.

Their bespoke Get Lost holiday service is the ultimate trip for anyone looking to get away from it all - especially if your idea of fun is being deposited in the middle of nowhere with only a backpack, a GPS tracker and a toothbrush to your name.

Travellers are then tasked with the daunting job of navigating their way back towards civilisation - a challenging but ultimately rewarding experience for those hoping to embrace their inner nomad.

From Mississippi to Morocco

When you picture the kind of person who might embark on an expedition of this kind, visions of burly, lycra-clad men come to mind - the sort of individuals who wear arctic jackets to the supermarket, and exclusively eat their meat on the bone.

You may not envisage a mum of two from Texas.

But get to know the real Esther Spengler, and you’ll understand why she needed a trip like this in the first place.

“After being married for almost ten years and raising two children as a stay at home mum, you kind of lose yourself,” says Esther.

“I'd become really dead inside, and I didn't know who I was anymore as an individual.”

While searching for an anniversary present for her husband, Esther stumbled upon the Black Tomato promotional video. It was a moment that would change her life for good.

“As soon as I watched it, I was crying, because it struck a chord and I couldn't even describe it. It's like my heart started to beat again.”

Fast forward to 2021, and Esther had saved enough money to make her dream trip a reality.

“I was doing all sorts of things. I was donating plasma. I was running around doing deliveries. I was fundraising. I was doing anything I could think of to scrape this money together.”

And the expedition? A three day excursion into the Moroccan wilderness, complete with fire-lit evenings beneath the stars, rugged cliff top vistas and the endless expanse of the scorching desert.

But in true Black Tomato style, Esher wasn’t made aware of this until she left.

“I didn't know where I was going,” she smiles.

“I just really hate the cold, so I was like, it would be my luck for them to just pick the polar region, you know?”

As it turned out, her destination was a secluded location high in the Anti-Atlas Mountains - a beautifully treacherous terrain filled with sheep, macaques and the occasional viper.

She spent three days in this environment, circumnavigating sand dunes and hiking across shrub-lined mountainsides.

“The fact that I was in Morocco really didn't hit me until I was out there in the desert. I was sitting on top of a sand dune watching the sunset and it was just everything I'd ever imagined it to be.”

When night fell, Esther unpacked her tent and constructed her camping stove, surviving off of freeze-dried provisions beneath the moon-lit sky.

“By the third day, I’d gone down into a riverbed and there were date palm trees and more villages. I hated that third day, because I could start to see telephone poles and villages and I'm like, can I just sneak off into the mountains and stay here forever?”

Fighting for my life

For Esther, her Get Lost experience was more than a holiday. It was an act of hope.

“I was in deep depression and just the fact that I felt myself coming alive again, it was a self-prescribed attempt at trying to find life again.”

Since returning home, she has signed up to join the army - an attempt to continue her passion for map reading, circumnavigation and adventure.

“My clock is ticking and I'm going to start doing the things that make me come alive. I came back with a fresh vision for my life,” she smiles.

“Why would I ever want to go on a regular vacation again?”

Watch the video above to find out more about the Get Lost experience.