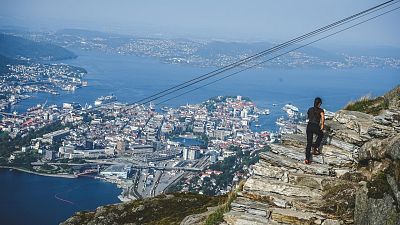 I love walking. Living in London, where you just sit in traffic in a car, my feet are my main mode of transport.

So when I go abroad, it's always a pleasant surprise to discover a city that can be explored exclusively on foot. That’s exactly what I found when I visited Bergen in Norway earlier this year.

But just why is it so easy to get around this Norwegian city without using a car or public transport?

Numerous pedestrian-only zones can be found throughout Bergen. From main shopping streets to central squares, you can get pretty far without having to share space with a car.

It is also one of three Norwegian cities with a low emissions zone to keep air pollution down in central areas. This means that vehicles have to pay a fee to enter, with more polluting cars paying more

Not a problem in a city where 30 per cent of vehicles are electric or hybrid, one of the largest shares in the world. Even when looking for a taxi as a tourist, it isn’t hard to find one that doesn’t use fossil fuels.

In 2023, the city is hoping to take this a step further by piloting its first zero emissions zone in hopes of making the city centre entirely emissions-free. By 2030, the goal is for no fossil fuels to be used for transport, city services or heating.

The streets are also exceptionally clean compared to my home city of London. This is, in part, thanks to an innovative underground waste management system called ‘Bossnet.’ It sucks around four tonnes of trash away from the city centre every day, sending it to sorting plants on the outskirts. It reduces the need for rubbish collection trucks to enter the city centre, keeping the streets safer and cleaner.

Altogether, these measures to reduce air pollution and create safe spaces for pedestrians make Bergen one of the easiest cities I’ve ever explored on foot. Unlike in many other European cities I’ve been to, walking didn’t feel like a second thought in its urban planning.

You might be thinking that walking is an easy mode of transport if you only visit a few of the top attractions a city has to offer.

This may be true but I wasn’t just in Bergen for pleasure. Between work, finding food and seeing the sights, I racked up nearly 60,000 steps. That is an average of 15,000 every day I was there.

In my downtime, I visited the World Heritage site of Bryggen, the city’s historic harbour district, and rode the Fløibanen funicular. These are some of the most visited attractions in Norway - all easily accessible by foot from my city centre hotel.

In the end, my trips to and from the airport on public transport were the only times I wasn’t pounding the pavement during my four-day trip.

But even this, mostly run by an agency called Skyss, is cheap and easy to use even for someone with minimal Norwegian language skills. Light railway systems and fossil fuel free bus routes cover most of the city and surrounding area.

The green transportation network stretches even further than the limits of the city too. I didn’t get a chance during my short time in Bergen, but there are numerous electric cruises and ferries running through this region’s waterways.

Western Norway, where the city is located, has the largest share of electrified vessels in the world.

One of Bergen’s highlights is Mount Ulriken which overlooks the city with incredible views of the surrounding landscape. Though there is a cable car to the top, even here walking is an option for visitors. 1,300 steps on a well maintained pathway mean it isn’t a desperate scramble to climb the 290 metres to the peak.

It is one of a series of recently renovated walking routes up Norway’s mountains - many of which make use of beautifully crafted stone staircases like Mount Ulriken. Nearly 300 have been built over the last 20 years by a team of Sherpas from communities in the foothills of the Himalayas. They built these trails by hand in much the same way as they do in Nepal.

The longest stone staircase in the country can be found in the town of Mosjøen. Known as the Helgelandstrappa, this route takes visitors up 3,000 steps to the 818 metre high peak of the Øyfjellet mountain.

While they make it safer and easier to hike up Norway’s mountains, they also serve a dual purpose in protecting vulnerable natural sites from the footfall of tourists. Erosion can be a big problem for these Norwegian mountainsides, making it treacherous to walk on unsure paths and destroying the ecosystems that surround them.

But the Sherpa stairs help guide visitors along routes that are solid and won’t collapse - keeping nature, and those out to enjoy it by foot, safe.