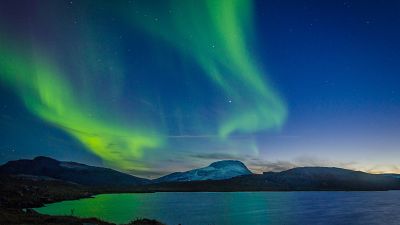 The natural world is full of wonders that will take your breath away. The best part is, you don’t necessarily have to travel far to experience them. We’ve rounded up seven of the most amazing natural phenomena you can see in Europe – all you have to do is be in the right place at the right time.

During the summer you can experience the disorientating phenomenon of 24-hour daylight by heading north of the Arctic Circle. Known as the Midnight Sun, it occurs due to the angle at which the earth rotates on its axis relative to the sun. In places such as Tromso, Svalbard, and the Lofoten Islands in northern Norway, for a period from roughly mid-May until the end of July, rather than setting, the sun simply hovers above the horizon before rising again. This results in a prolonged combination of sunset and sunrise that bathes the land in an atmospheric glow, and gives you the chance to go hiking or kayaking in the middle of the night.

The dramatic opposite of the Midnight Sun, the Polar Night is where the sun does not rise above the horizon all day. This doesn’t necessarily coat the world in complete darkness though, and the sky is often tinted with gorgeous dark blues and pinks. Combined with the light of the moon reflecting off the pure white snow, the effect is stunning. It also provides the perfect opportunity for stargazing. You can experience this phenomenon high up in northern Sweden in cities such as Kiruna, where the polar night lasts for approximately 28 days from early December onwards.

This might sound ominous, but the black sun (‘sort sol’ in Danish) is a breathtaking display during which up to a million migrating starlings take to the skies. It occurs during sunset in spring and autumn, and it gets its name because there are so many birds in the sky that it feels as though they block out the sun. The sweeping, coordinated movements they make look almost like dancing and are mesmerising to watch. The phenomenon usually lasts around 20 minutes, and the Wadden Sea National Park is one of the best spots to observe it.

To experience a true winter wonderland, head to the Riisitunturi National Park in the wilderness of northern Finland. Here, temperatures can drop to a bone-chilling -40 °C, causing the water droplets in the air to freeze to the trees. This transforms the forest into a sea of natural ice sculptures in all sorts of weird shapes. Some curl over at the top like a witch’s hat, while others thicken up into monster-like forms. The best way to explore them is by strapping on some snowshoes and warm clothes for a hike through the still and silent statues.

Sea sparkle is an ethereal phenomenon caused by bioluminescent plankton that looks straight out of a fairy tale. Although more famous in tropical places like the Maldives, it’s also possible to spot this otherworldly blue glow along the Welsh coast. These tiny creatures emit light as a defence mechanism when disturbed, brightening up the waters with an incandescent illumination. They normally appear in warm, shallow waters such as at Penmon Point in Anglesey during the summer months, but it’s impossible to predict precisely when or where. Dark nights are the best time to fully appreciate their mesmerising bioluminescence.

Switzerland’s Lago Bianco (White Lake) is a reservoir at the Bernina Pass 2,234 metres high in the Swiss Alps. As temperatures plummet in the winter, it’s sometimes possible to see two different but equally bewitching rare natural phenomena in its waters. The first are frozen bubbles of methane, which become trapped in the lake when it solidifies very quickly and form columns of circles rising to the top. The second is black ice, where the lake’s surface freezes into perfectly transparent, glass-like ice that enables you to see all the way down into the lake’s dark depths.

This list wouldn’t be complete without the Aurora Borealis, or Northern Lights. Arguably the world’s most amazing light show, its dancing curtains of colour are the result of electrically-charged solar particles hitting the Earth’s magnetic field. There are several countries that offer a chance to catch the Northern Lights, but Iceland is one of the best. It’s impossible to guarantee you’ll see them, but the peak time is between September and April, on a dark night with no cloud cover. Maximise your chances by heading to the north of the country, where the nights are longer and skies are clearer.