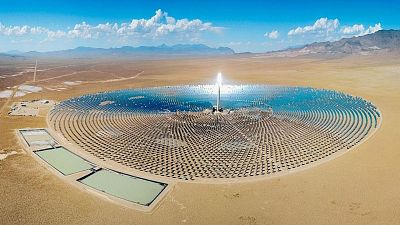 The Nevada desert is home to some of the world's most expansive solar projects   -   Copyright  Getty
By Shannon McDonagh  •  Updated: 14/10/2021

Despite our best efforts, humans are still far from capturing even a fraction of the sun's true energy potential. In fact, more than 10,000 times the earth’s total use of solar energy is striking the earth at any given moment.

But high-impact solar farms are an excellent way of making use of this power and are responsible for some of clean energy’s most ambitious projects.

Panels spanning millions of acres of natural environments contain architectural and engineering potential that is only in its infancy. Deserts, mountains, and rivers are now resources to achieve this, rather than obstacles.

As a result, the world is now home to some astonishing solar farms that produce billions of tonnes of electricity each year.

Here are some of the most remarkable examples from around the world.

Rural Seville’s Germasolar Thermasolar plant is centred around a tower receiver, where spirals of concentric rings harness pioneering technologies imported from the US. The sheer expanse of this solar farm’s circular layout almost emulates an optical illusion from above.

The European Commission-funded solar farm has the remarkable ability to produce electricity for 15 hours without sunlight and can automatically adjust its capacity for optimum environmental impact.

The Mohammed bin Rashid Al Maktoum Solar Park is the world’s largest single-site solar farm, with a planned production capacity of 5,000MW by the end of the decade.

A hub of innovation, its all-encompassing structure also houses a Research and Development Centre and a 3D-printed lab.

According to estimates, the farm will cut carbon emissions by around 6.5 million tonnes every year.

A huge sum of 1 billion dollars was invested into Crescent Dunes from the likes of Citigroup and the Obama Foundation. It’s striking desert design concept came to fruition as the world’s first concentrated solar plant, storing energy through molten salt.

Sadly, it hasn’t been able to produce energy since 2019 due to a number of technical difficulties that came with its near-incomprehensible size.

Crescent Dunes remains intact and there are hopes that one day the right investment will revive it back to its groundbreaking potential.

Provence's waters were the perfect spot to pioneer Europe's first floating solar farm. Situated on the artificial lake of a former quarry, this project is composed of raft-like devices that offset thousands of tonnes of carbon emissions in the region each year.

This solar farm floats on an artificial lake created on the site of a former coal mine. From an aerial view, the farm’s sea of blue panels could quite literally be mistaken for real water. It consists of 166,000 panels and produces enough energy to power 15,000 homes.

There are many little-known benefits to constructing solar farms on water - panels stay cleaner for longer due to lack of dust, and lower temperatures boost its overall power efficiency.

This “solar pergola” powers Parc del Fòrum, one of Barcelona’s many public parks spanning 5.7 hectares, which most notably plays host to the world-renowned Primavera Sound festival.

It sits at the end of a seaside esplanade, attracting tourist attention for its sci-fi influenced elevated structure that appears to be floating from a distance.

5. The Heart of New Caledonia

It is modelled after the Heart of Voh, a clearing famed for its natural heart-shaped landscape in a sea of mangrove trees that has adorned the covers of UNESCO literature.

Once completed the project will power 750 of the island’s homes.

Disney was one of the first corporations to note the significance of solar energy. In 1982 they installed solar panelling on the roof of the resort’s Universe of Energy building and haven’t looked back since.

This Mickey Mouse shaped solar farm was built in 2016 on Disney World land. The iconic image is situated near the resort’s EPCOT theme park, consisting of 50,000 panels.

Its energy needs are greater than that provided Iby this mouse, so they outdid themselves a couple of years later with a project that featured a mind-blowing half a million panels.

A pioneering series of “solar mountains” is one of the 10 shortlisted projects for Burning Man’s 1,600-hectare fly ranch in the middle of the Nevada desert.

Based on the titular festival, this system would generate around 300,000 kWh a year in clean energy. would comprise four units, made from recycled timber and clad in solar photovoltaic panels.

Eco-innovators are hoping to see it come to fruition due to its real landmark potential.

Up until recently, this solar farm was France’s largest by a longshot. Its panels are shaped perfectly into the landscape of the mountainous southern Alpes-de-Haute-Provence region that reach over 2000 feet above sea level.

The vast photovoltaic park was designed with the view of having as little environmental damage to the area - its panels were laid without concrete foundations so the acres of grassy hills remain intact.

Nanping City Solar Farm is another example of an ambitious scheme that honours the natural terrain it was built upon. Much of China’s huge expansion into solar energy this decade has been as a result of the work of the people responsible for designing this marvel, Xinyi Solar.

In the right sunlight, the layout of these panels creates a geometric-looking rendering of the Fujin mountains.