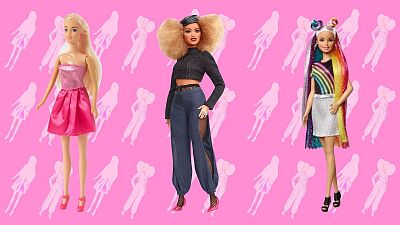 The iconic dolls will be turned into new toys for Mattel's millions of customers   -   Copyright  Canva
By Rosie Frost  & Shannon McDonagh  •  Updated: 11/05/2021

Plastic parts from the old toys will be used to create future products for the company, who are offering free printable shipping labels on their website to facilitate the service. The toys don’t have to be functional - or even clean - the company just asks that the batteries be removed first.

Mattel has pledged to sort through each toy, separating them by material type, then have them processed.

Each item that can't be repurposed in new toys will either be turned into other plastic products or converted from waste to energy. The scheme has launched in the US and Canada and will open to customers in France, the UK, and Germany in due course.

The classic toymakers achieved international fame when they created the first Barbie doll in 1959. They now operate on revenues of almost €4 billion.

Mattel is finally reacting to our plastic problem

Environmental activists have long called for toy manufacturers to address problems concerning the use of unsustainable materials and excess consumption. Up to 90 per cent of all toys are made from plastic, with an estimated 1402 tonnes sold each year that will end up on coastlines by the end of their lifespan in the UK alone.

The decline of toy stores in the digital age has not reflected how important they remain to the development and social skills of children around the world.

Mattel’s move comes in aid to the company’s aim to have 100 per cent recycled, recyclable or bio-based plastic materials across all products and packaging by 2030.

Certified carbon neutral Tesla matchbox cars will also be on sale from 2022.

Other toy creators want to be part of the circular economy

The Danish toy company has committed to phasing out the plastic bags it currently uses to package bricks this year. Forest Stewardship Council-certified recyclable paper bags will start appearing in Lego kits from next year instead.

“We have received many letters from children about the environment asking us to remove single-use plastic packaging,” says CEO, Niels B Christiansen. “We have been exploring alternatives for some time and the passion and ideas from children inspired us to begin to make the change.”

The paper bags already have the approval of children in test groups who liked them because they were environmentally friendly and easy to open.

This change is part of a larger commitment to ensure all of its packing sustainable by 2025 which includes removing all single-use plastic from its products.

Lego has also pledged $400m (€339m) of investment for sustainability and social responsibility initiatives to “build a better planet for future generations”. The toy brick maker says that it is becoming “increasingly urgent and important” to prioritise environmental and social action.

“We cannot lose sight of the fundamental challenges facing future generations,” says Christiansen. “As a company who looks to children as our role models, we are inspired by the millions of kids who have called for more urgent action on climate change.

“We believe they should have access to opportunities to develop the skills necessary to create a sustainable future.”

As well as making the way the company operates more eco-friendly, some of the money will go to educational programmes around the world to help children learn through play.

Through partnerships with UNICEF, Save the Children and other local organisations they hope to provide eight million children with opportunities to develop skills through play.

LEGO currently uses an estimated 90,000 tonnes of plastic to make its products every year. Much of that goes into making the actual bricks themselves.

If they aren’t disposed of properly, these bricks could last up to 1300 years in our oceans, a study from the University of Plymouth published earlier this year found.

The company has already invested in a Sustainable Materials Centre which has spent the last five years looking at alternative materials including plant-based plastics.

Like Mattel, the company aims to make all of its colourful construction toys from sustainable materials by 2030.

Life in plastic, it's fantastic! COVID vaccine scientist gets Barbie