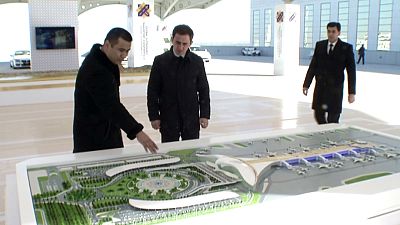 Transport systems are a major source of pollution. Figures published by the World Bank suggest emissions from the transport sector make up nearly a quarter of global emissions.

The first United Nations Global Sustainable Transport Conference attracted professionals to discuss how to reduce the ecological footprint caused by all methods of transport.

“We here for people, including our children and grandchildren,” said Ban Ki-moon, UN Secretary-General. “Achieving sustainable transport is necessary to realize our vision of a world that is safer and healthier for all people.”

Experts say it is important to persuade car drivers to switch to rechargeable electric vehicles.

Norway has the highest plug-in electric car ownership per capita in the world.

“If you buy an electric car in Oslo, our capital, you can drive in the collective fields on the side of the road, so you don’t have to end up in queues,” John Mikal Kvistad from the Royal Norwegian Embassy told Euronews. “Taxes are extremely low for electric cars. So, it’s also economically very smart to get one.”

In cities, cycling is a key part of the solution to climate.

Electric trains are said to be the greenest way to commute.

“Electric trains are clean. It depends if the electricity is clean at the origin,” Jean-Pierre Loubinoux, International Union of Railways, explained to Euronews. “Marrakesh has the biggest solar field in the world, and this would be dedicated to train electricity. But there are other examples in the world, and I’m sure that Turkmenistan with the radiation you have here in your country can also develop solar energy that can be used for train driving.”

An expert report recommended an annual investment into green transport of 2 trillion US dollars, something very few countries are ready for.

“As developing counties concerned, they need to invest 3 percent of their GDP every year for infrastructure,” Wu Hongbo, UN Under-Secretary-General for Economic and Social Affairs, told Euronews. “But public financing – domestic, international, combined – would not be enough. So, we need to mobilize the private sectors.”

That level of investment could lower operating costs, and save up 70 trillion dollars by 2050, not to mention emitting fewer hydrocarbons into the air.