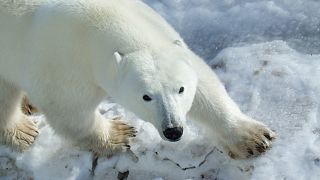 The bear-dar is helping to detect polar bears that come close to communities in the Arctic.   -   Copyright  © Katharina M Miller/Polar Bears International
By Rosie Frost  •  Updated: 02/01/2023

Climate change is warming our planet and reducing the amount of sea ice in the Arctic.

Ice-free periods are becoming longer and polar bears are forced to spend more time on land, increasing the risk of dangerous encounters with people. Canada’s Hudson Bay, for example, is losing an average of one day of sea ice per year.

As greenhouse gas emissions continue to rise, the bears will spend even more time on land, close to communities in the Arctic.

But if a bear can be spotted as it approaches, non-lethal deterrents like flares or noisemakers can be used to scare it away. This reduces the risk of harm to these vulnerable creatures and to humans.

This is the idea behind Polar Bears International’s ‘Detect and Protect’ research, which uses radar systems and artificial intelligence (AI) to help facilitate this.

Known as ‘bear-dar’, these systems are being tested and developed by Director of Conservation Technology BJ Kirschhoffer in Churchill, Canada - the polar bear capital of the world.

What is bear-dar and how does it work?

The technology uses a motion-tracking radar. The original system detects anything that comes close to the community, from polar bears to arctic foxes and moose. It's almost too effective - the team doesn’t want it to alert on every living thing that comes within range.

This is where the AI comes in. When we last spoke to BJ in 2020, he had just built a model to classify each animal the radar could see.

“The polar bear got the classification of a large animal and we always put them in the same boxes.”

BJ’s team was using the AI built into the one radar they had available. Recently they found that it was only around 50 per cent accurate in labelling what it saw as a polar bear. The technology’s firmware has just been updated and he is hoping that more points of data will soon help build a more effective system for identifying these wild animals.

They’ve also made it portable with a telescopic tower that can be put on the back of a truck and set up somewhere new within an hour. The more data that can be gathered, the more their understanding of the landscape grows.

In the last couple of years, two more radars have also been added to the array of polar bear-detecting devices.

One, less portable system that sees over a longer distance is useful around the community’s waste sorting facility which, as you might expect, attracts animals. It's a very powerful system but it requires a lot of energy to run.

“Two of the three systems that we’re using aren’t designed for polar bears. These are things for major civilian infrastructure, military, things like that,” BJ says.

The final bear-dar is being purpose built by a team at Brigham Young University in Utah, US. It's lower power and easy to use - almost like a phone app. But it requires an internet connection which is a setback in remote places.

Each option has its own advantages and disadvantages as scientists work to develop an effective warning system for Arctic communities.

“I think there’s a tonne of work to be done,” BJ concludes, “and I think it’s a super interesting race to be a part of.”

Expanding the possibilities for bear-dar technology

The different systems the researchers are developing could have many applications outside of the community in Churchill.

“I think what’s interesting about testing the three of them together is we can start to become, for lack of a better term, experts in some of the options that are available out there,” BJ says.

Somewhere like Norway is going to have different needs than the Canadian Arctic or the US, he explains.

“Hopefully we can act as almost advocates for northern communities and say, hey, here are three different things that are on the market now that could work in different scenarios.”

It also shows the manufacturers of these radar systems that they have a variety of applications outside of their intended use.

Researchers tracking wildlife in these harsh weather conditions could use them to identify polar bear dens. Information can be gathered on how often they come out or how far they go, increasing our understanding of the lives of these majestic creatures.

BJ also mentions communities around the world coexisting with animals where climate change is increasing the chance of conflict. Elephants in Africa, for example.