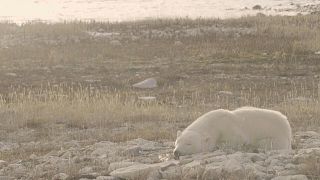 We’ve all seen the pictures of starving polar bears, struggling to survive climate change. But as global temperatures continue to rise, experts say bears today are spending up to a month longer than their parents waiting for the ice to return after summer.

Every year, starting in late June when the bay ice disappears, polar bears in the northern Canadian province of Manitoba move onto shore to begin a period of forced fasting.

Without the sea ice they are unable to hunt for seals, their main source of food.

"While these bears sit on shore, they're losing a kilo or two every day. That can go on for about 180 days before they really start to have a problem," says Geoff York, senior director of conservation at Polar Bears International (PBI).

Polar bears could starve to extinction due to global warming

Once on solid ground, the bears "typically have very few options for food," explains York.

York spends several weeks each year in Churchill, a small town on the edge of the Arctic in Manitoba. There he follows the fortunes of the endangered polar bears.

Climate warming is affecting the Arctic three times as fast as other parts of the world - even four times, according to some recent studies. So sea ice, the habitat of the polar bear, is gradually disappearing.

“The fate of the polar bear should alarm everyone” because the Arctic is a good "barometer" of the planet's health, says Flavio Lehner, a climate scientist at Cornell University who was part of the expedition.

Since the 1980s, the ice pack in Hudson bay has decreased by nearly 50 per cent in summer, according to the US National Snow and Ice Data Centre.

If a bear is lucky enough to find a beluga whale carcass or if a seal dares to swim too close to shore, the large carnivore may be able to eat during the summer. But for most of those months they are fasting, or eating very small snacks of any fish they’re able to catch.

A report published two years ago in the journal Nature Climate Change suggested that this trend could lead to the near-extinction of these majestic animals: 1,200 of them were counted on the western shores of Hudson Bay in the 1980s. Today the best estimate is 800.

What happens when a polar bear is starving?

The polar bear, technically known as the Ursus maritimus, is a meticulous carnivore that feeds principally on the white fat that envelops and insulates a seal's body.

But these days this superpredator of the Arctic sometimes has to feed on seaweed, as a mother and her baby were seen doing not far from the port of Churchill, the self-declared ‘Polar Bear Capital’.

As a result, births have declined, and it has become much rarer for a female to give birth to three cubs, once a common occurrence.

As a polar bear’s physical condition declines, York says, their tolerance for risk rises, and "that might bring them into interaction with people, which can lead to conflict instead of co-existence."

In desperation, bears began frequenting the local dump in Churchill, Manitoba - a source of easy, but potentially harmful, food for them. They could be seen ripping open rubbish bags, eating plastic or getting their snouts trapped in food tins amid piles of burning waste.

Since then, the town has taken precautions: The dump is now guarded by cameras, fences and patrols.

A conservation officer, Ian Van Nest, patrols the town’s limits to keep its 800 inhabitants safe. Every morning he checks the areas around schools to ensure the children will be safe upon arrival.

All across the town, people leave cars and houses unlocked in case someone needs to find urgent shelter during an unpleasant encounter with this large land-based carnivore.

Posted on walls around town are the emergency phone numbers to reach Van Nest or his colleagues.

When they get an urgent call, they hop in their pickup truck armed with a rifle and a spray can of repellent, wearing protective flak jackets. He emphasises that they do not shoot at the bears, but fire warning shots to scare them off.

Sometimes the animals have to be sedated, then winched up by a helicopter to be transported to the north, or kept in a cage until winter, when they can again feed on the bay.

Churchill's only ‘prison’ is inhabited entirely by bears, a hangar whose 28 cells can fill up in the autumn as the creatures maraud in mass around town while waiting for the ice to re-form in November.

Watch the video above to learn more about polar bears in Canada.