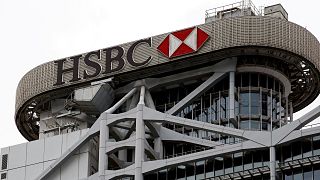 HSBC has updated its climate policy to reduce funding for oil and gas.   -   Copyright  Reuters
By Euronews Green  with Reuters  •  Updated: 14/12/2022

One of the biggest banks in the world has announced that it will no longer fund new oil and gas fields.

HSBC - the largest bank in the UK and the seventh largest in the world - will not support oil and gas projects that received final approval after the end of 2021.

This is a necessary step if the world is to reach net-zero emissions by 2050, the International Energy Agency has said.

The bank is currently one of the biggest lenders to energy companies in the world.

"HSBC's announcement sets a new minimum level of ambition for all banks committed to net-zero," said Jeanne Martin, a campaigner at Share Action.

Financial firms around the world are increasingly pledging to help fight climate change, but most have yet to put firm plans in place.

HSBC joins a small number of other lenders reducing funding for fossil fuels, including NatWest, which cut lending to clients in the oil and gas sector by 21 per cent in 2021.

Other lenders that have tightened oil and gas policies recently include Dutch bank ING and French lender La Banque Postale.

Also on Wednesday, Barclays said it had increased its sustainable and transition finance target to $1 trillion by 2030 and would pump more of its own money into energy startups.

Amid Russia's invasion of Ukraine, and a resultant surge in energy costs, the policy was also "pragmatic" she said.

The bank will continue to finance existing oil and gas fields.

"The world cannot get to a net-zero energy future without energy companies being at the heart of the transition."

To ensure oil and gas companies are on-track, the bank would now ask for new information, including production levels beyond 2030, she added.

Over in the United States, political pressure ensures most large lenders continue to finance oil and gas expansion, despite concern from climate campaigners.