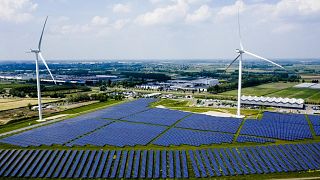 Russia’s invasion of Ukraine has shown the dangers of Europe’s reliance on imported fossil fuels. Decarbonisation targets and the shift to renewable power have sped up in some EU countries as they look to reduce their reliance in response to the war.

The bloc as a whole is hoping now to reach 82 per cent clean energy by 2030. But a handful of EU nations are accelerating fossil fuel phase-outs, looking to reach 100 per cent clean power by the end of the decade, according to energy think tank Ember’s EU power targets tracker.

In April, Portugal announced that it was accelerating its energy transition, aiming to increase the proportion of power produced by renewables in the country to 80 per cent by 2026 - four years earlier than previously planned. It already gets 60 per cent of its electricity from clean sources - one of the highest in Europe.

Portugal hasn’t historically depended on Russian gas like many other European countries, relying instead on imports from Nigeria and the US. It also became coal free at the end of 2021 after shutting down its last coal-fired power plant.

The Iberian nation's largest utility company, EDP, is aiming to provide 100 per cent renewable power by the end of the decade. All of this puts Portugal on track to becoming fossil fuel free by 2030, according to Ember.

According to research published by industry experts Oliver Wyman earlier this year, the Netherlands is leading Europe’s energy transition. Offshore wind power generation is set to double by the end of the decade with a goal for 150 GW of electricity production in the North Sea by 2050 - enough to power 230 million European homes.

But the Netherlands has suffered some consequences after Russia invaded Ukraine. Earlier this year the country reverted to coal use to make up for shortages from the energy crisis.

Though the nation is aiming for 100 per cent clean power by 2030, not all of that will be from renewables. While renewables include sources of energy that can replenish themselves like wind and solar, clean power encompasses all sources of electricity that don't produce carbon emissions such as nuclear.

The Netherlands still has a high renewable energy target of 97 per cent by the end of the decade.

In response to the Ukraine war, the Danish government is still planning to phase out natural gas entirely and quadruple the production of solar and wind power. Though the output of natural gas may increase in the short term to help Europe wean itself off of Russian fossil fuels, the country says plans to terminate production in the long term haven’t changed.

By upping the energy produced by clean sources, Denmark is also hoping to become a renewable power exporter. By 2030, the country is aiming for 100 per cent renewable power production.

In 2021, the Austrian National Parliament introduced the Renewable Energy Sources Expansion Act (EAG). It set the goal for the country to use 100 per cent renewable electricity by 2030.

Around €260 million of investment will see one million roofs producing solar electricity and an increase in wind and hydro power. There will be special grants to support clean technologies with €1 billion to be invested annually in the expansion of renewables by 2030.