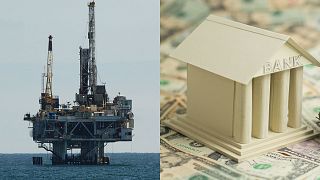 The G20 and global development banks spent nearly twice as much financing international fossil fuel projects as they did on renewables from 2019 to 2021   -  Copyright  Canva
By Charlotte Elton  •  Updated: 03/11/2022

The G20 and global development banks spent nearly twice as much financing international fossil fuel projects as they did on renewables from 2019 to 2021, a new report finds.

The study - carried out by Oil Change International and Friends of the Earth US - paints a damning picture of money pouring into highly polluting international projects.

From 2019 to 2021, global development banks (MDBs) and G20 countries - including France, Germany, and Italy - provided at least $55 billion (€55.5 billion) per year in international public finance for oil, gas, and coal.

This astronomical figure is a 35 per cent decrease from the 2016 to 2019 period - but nonetheless jeopardises crucial climate pledges.

“This fossil fuel finance was almost two times more than their support for clean energy, which averaged only $29 billion (€29.3 billion) per year,” the report reads.

How does international public financing work?

International public finance refers to the money invested by governments and international organisations in ventures overseas.

The World Bank, for example, raises money from member states and funds borrowed from the international capital markets. The money finances various infrastructural projects around the world.

According to the International Energy Agency, limiting global warming to less than 1.5 degrees Celsius on pre-industrial levels requires an end to all new fossil fuel projects by this year.

At COP26 in Glasgow last year, 39 countries and institutions signed a joint pledge to end direct international public finance for fossil fuels by the end of this year.

But money is still being funnelled into oil and gas ventures overseas.

The report analyses the international public finance records of Germany, Italy, France, and the UK, as these are the four European countries in the G20. All are signatories to the Glasgow statement which saw them pledge to end the direct international financing of fossil fuels.

Germany provided fossil fuel projects with $2.8 billion (€2.83 billion) in public financing per year in the period between 2019 and 2021.

However, Germany also provided $2.2 billion (€2.22 billion) for clean energy through its international public finance institutions - the third highest figure for any G20 country.

France spent €260 million on fossil fuel financing. But the country does have have a full coal exclusion policy.

France also provided $2.8 billion for clean energy through its international public finance institutions - the highest figure in the G20.

The report also named and shamed institutions like the European Investment Bank and the European Bank for Reconstruction and Development, which invested $670 million (€678 million) and $640 million (€646 million) in International fossil fuel financing, respectively.

What should countries and multinational development banks do?

If they did so, their current annual average for clean energy would triple to $85 billion (€86 billion).

“We had our chance to make incremental changes, but that time is over,” said Inger Andersen, the executive director of the UN Environment Programme.

“Only a root-and-branch transformation of our economies and societies can save us from accelerating climate disaster.”

G20 focusing too much on geopolitics, rather than the climate crisis?

Explainer: What is the G20?