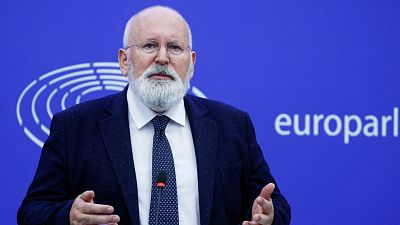 The European Union plans to cut emissions by 57 per cent by 2030, a two per cent increase on its previous goal.

The updated target - which is compared to 1990 emissions levels - proves that the EU is committed to environmental action, says the bloc’s climate policy chief Frans Timmermans.

"I'm happy to announce here today that the EU stands ready to update our NDC reflecting this higher ambition," he said, speaking at the COP27 conference in Sharm El Sheikh.

"Don't let anybody tell you, here or outside, that the EU is backtracking," Timmermans added.

However, campaigners called for a more radical target, deriding the new policy as “breadcrumbing.”

Chiara Martinelli, Director at CAN Europe says the two per cent increase “is far from the dearly needed at least 65 per cent, which is the equitable share that the EU should commit to globally limiting temperature to the 1.5°C threshold.”

“This small increase announced today at COP27 doesn’t do justice to the calls from the most vulnerable countries at the frontlines. If the EU, with a heavy history of emitting greenhouse gases, doesn’t lead on mitigating climate change, who will?”

The 57 per cent reductions target is part of the EU’s ‘Fitfor55’ plan. This policy package aims to make the bloc carbon neutral by the middle of the century.

To achieve this target, countries are increasingly turning to renewable energy. The EU has also set up an emissions trading system - a market for carbon permits that can be traded between emitters. The number of permits available is being gradually reduced.

Other initiatives include carbon sinks and increased investment in electric cars. As of 2035, the bloc will require all new cars and vans to be zero-emission, effectively banning new diesel and petrol vehicles.

However, campaigners insist that the EU should do more.

CAN Europe has analysed whether existing pledges will keep us below the Paris Agreement target of 1.5 degrees Celsius of global warming. It concluded that the EU emissions reduction target should be raised to 65 per cent to avoid devastating temperature rises.

According to a report by environmental Climate Analytics, the EU could reach net zero emissions by 2040 if it raised its climate ambitions.