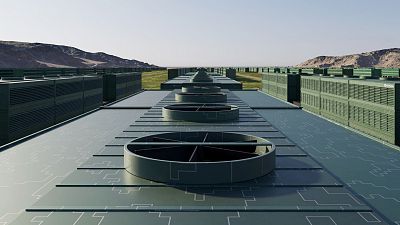 A new project could suck millions of tonnes of carbon from the air by the end of the decade.

Until recently, direct carbon capture - a type of technology that draws carbon dioxide from the air and stores it underground - was the stuff of science fiction.

But a US developer has unveiled plans for the world’s largest direct capture facility.

By 2030, ‘Project Bison’ hopes to capture five million tonnes of CO2 per annum, roughly the equivalent of 5 million return flights between London and New York.

The solution to this problem is to stop producing greenhouse gases. Carbon capture is no substitute for rapid decarbonisation, which requires countries to swiftly phase out fossil fuels and electrify industries like agriculture and transport.

But while it may not be a silver bullet, carbon removal can help minimise the impact of the carbon that’s already in the air.

The technology is still in its infancy. Currently, the world is able to capture 40 million tonnes of CO2 a year, roughly 0.1 per cent of 2019’s global emissions.

There are 26 commercial carbon storage facilities in the world, with at least another 30 planned.

How does carbon capture technology remove carbon from the air?

There are several methods of capturing and storing carbon.

Project Bison - run by US company CarbonCapture Inc - will be a direct air capture (DAC) system, extracting CO2 straight from the atmosphere.

Plants and trees do this every day through photosynthesis. DACs emulate the process through a series of chemical reactions.

In DAC, air is passed over solid sorbents - a sort of 'filter' - that can capture the CO2 in the air.

Once the solid sorbent has captured all the CO2 that it can, the reactor is taken off-line and heated to release pure CO2. The reactor is then cooled and put back into service to repeat the cycle.

Another method of carbon capture is the 'liquid solvent' approach.

First, a fan pulls air into an ‘air contactor,’ where it passes over thin plastic surfaces covered with potassium hydroxide solution.

The solution chemically binds with the carbon dioxide molecules, trapping them in the liquid as carbonate salt.

Through further chemical processes, the salt is turned into pellets and then into pure gas, ready to be stored deep underground.

In the case of Project Bison, carbon storage developer Frontier Carbon Solutions will inject the gas into ‘deep saline aquifers.’

To minimise the project’s energy footprint, the system will be electrified.

When will Project Bison start pulling carbon from the air?

The project should start operating at the end of 2023. In its first year, it will suck 10,000 tonnes out of the atmosphere.

However, the ‘modular’ design of the facility will allow it to scale up rapidly, the company claims.

“By 2030, Project Bison is scheduled to have rolled-out five megatons of annual capture and storage capacity. At that point, we expect it will be the largest single atmospheric carbon removal project in the world.”

However, Project Bison is aided by the recent Emissions Reductions Act passed by the US congress. The act increased the government subsidy for capturing CO2 from polluting sources from $50 to $85 per metric ton.

For every tonne of CO2 it traps, CarbonCapture will sell ‘carbon credits’ to companies looking to offset their emissions.