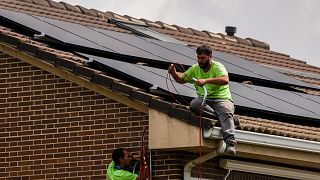 Increasing the EU’s renewable energy target by just 5 per cent could halve gas imports and save billions of euros.

This “small step up” in ambition for renewables would make a massive difference, according to energy think tank Ember.

Adopting a target for renewables to make up 45 per cent - instead of 40 per cent - of Europe’s energy mix by the end of the decade would save €43 billion in 2030, it calculated.

It would also slash EU gas imports in half, Ember’s new report shows.

“Just one small step up for renewables would see a giant fall in gas imports,” says Ember’s senior analyst and lead author of the report Sarah Brown.

“Europe has already made great progress towards ditching its fossil gas addiction, it cannot stumble near the finish line.”

The report comes as Europe’s energy ministers are about to make a crucial decision on whether to back higher renewable energy targets. The EU outlined plans back in May this year for a “massive” increase in wind and solar power in a bid to phase out Russian oil and gas.

Vice president of the European Commission Frans Timmermans said it was “clear we need to put an end to this dependence” - and do so a lot faster than was planned before Russia's invasion of Ukraine.

Next week energy ministers are set to vote on whether to increase targets from 40 per cent to 45 per cent by 2030 as part of the REPowerEU plan.

It’s very concerning to us that a less ambitious option is even on the table.

“A 40 per cent renewable target for the EU for 2030 is outdated - it was put on the table in summer 2021, before the Russian invasion of Ukraine and before the energy crisis,” says Walburga Hemetsberger, CEO of green energy NGO SolarPower Europe.

Hemetsberger adds that 45 per cent is the “only direction of travel” to strengthen Europe’s energy security and deliver climate goals.

“It’s very concerning to us that a less ambitious option is even on the table.”

Civil society groups and businesses, including Patagonia, Ecosia and Friends of the Earth, are calling for an even more ambitious renewables target of 50 per cent. Ember’s analysis shows that €48 billion could be saved in 2030 if this were to happen.

CAN Europe and the European Environmental Bureau say that this higher goal, alongside 20 per cent energy efficiency, is necessary to keep global warming below 1.5C.

The coalition of groups points to a recent poll which shows that 87 per cent of Europeans want massive investment in solar and wind power.

“The EU must seize this opportunity to go the extra mile,” Brown adds.

“The benefits of additional investment far outweigh the costs of insufficient ambition.”