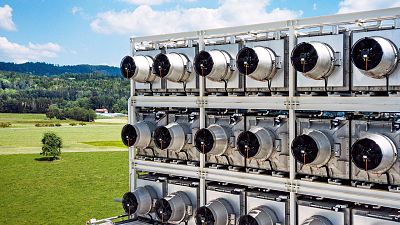 Climeworks has turned on the world's biggest carbon capture machine this week in Iceland.   -   Copyright  Climeworks
By Parisa Hashempour  •  Updated: 14/09/2021

Carbon capture is the solution to the climate crisis — but only if we act now.

Or so claim speakers at the Climeworks Air Capture Summit 2021.

The event, which is taking place over the course of the 14th and 15th September, explores the breadth of the potential of Direct Air Capture (DAC) technology.

DAC is a technology that captures Co2 from the atmosphere and either stores it underground or repurposes it for products and fuel.

It has been touted as a key method for keeping emissions below 1.5 degrees, with CEO and founder of Climeworks Jan Wurzbacher saying “We need carbon dioxide removal at quite a substantial scale. By mid-century, we need 10 billion tonnes removed each year.” DAC, he says, has the power to do this.

With COP26 — the UN’s upcoming climate summit — just a few months away, finding solutions to the challenges posed by carbon reduction is set to be a big talking point. But without collaboration, funding, and the right investment in infrastructure, experts from the world’s leading DAC businesses worry the world might miss the boat.

The time to act is now

“What if the numbers we have for carbon removal are too conservative?” asks Nicholas Eisenberg of Global Thermostat on day one of the Climeworks summit.

“The time we have is already very short — less than 20 years to meet our goals. Climate science tells us we need to start banging the curve of climate capture by 2030.”

Eisenberg advises that the global community works to mimic the fast deployment, funding and infrastructure that took place with the burgeoning of the solar industry.

“If we have to try and scale ten to 15 years from now it is going to cost a lot more, we absolutely have to get those deployments out there now.”

While DAC is a fully functional technology, there is scepticism about how well it can work in practice. Some put this down to the land footprint of the plants, alongside high costs and energy requirements. Put simply, a huge amount of infrastructure is needed to get the technology up and running.

Amy Ruddock, VP of Europe for Carbon Engineering, explained that policy is urgently needed to make DAC an effective option for reversing and combatting the negative effects of climate change.

“What is the revenue stream for cleaning our skies?” she asks attendees of the summit.

“There needs to be a clear source of revenue, and that is where government needs to step in.”

Though the costs are high now, they will be much higher if temperatures continue to rise, she argues.

Adding that concerns over land footprint may be misguided, Ruddock also says lower land and water use of carbon capture technologies means the global community has the opportunity to pursue two goals at the same time, for example, carbon capture and rewilding.

While the technology is in its infancy, the optimism of all speakers at Climeworks’ summit rang clear.

As Hans de Neve, co-founder of Carbyon put it, “the climate catastrophe has got the public's attention — people are asking regulators to do something.”