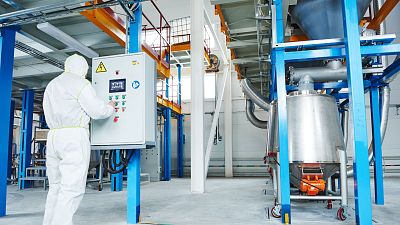 A worker in an industrial chemical factory. The European commission may delay planned reform of its chemical regulation laws.   -   Copyright  Canva   -
By Charlotte Elton  •  Updated: 17/10/2022

The EU is set to drop plans to restrict toxic chemicals, a move campaigners have slammed as a “shocking betrayal.”

In 2021, the European Commission (EC) announced a radical overhaul of REACH, its legislation regulating dangerous chemicals.

The planned reforms would have simplified chemical controls, and sped up checks on potentially dangerous substances, processes which typically take 10 years.

But the plan has been delayed by a year, a leaked EC 2023 work programme reveals.

The delay spells “game over” for reform, warns the European Environmental Bureau, a network of 170 citizens' organisations.

“This is a screeching u-turn away from excellent plans for greater environmental and health protections and towards the interests of industrial polluters,” says EEB head of chemicals policy Tatiana Santos.

“It is a shocking betrayal of the Green Deal.”

What is the EU’s Chemical control legislation?

Toxic chemicals can have a negative impact on human health, causing cancer, allergies, and respiratory diseases.

They enter the body through the airways, are absorbed into the bloodstream, and then carried to the rest of the body.

But EU regulations fail to protect consumers from these risks - a failure that the EC itself has acknowledged.

“[REACH] is too slow to sufficiently protect consumers and professional users against risks from the most hazardous substances,” a 2018 EC review of existing protections reads.

It currently takes up to 10 years to identify hazardous chemicals and another decade to restrict their use, the EEB warns. The reforms would have sped up this process.

But according to a leaked EC 2023 work programme, the overhaul will be delayed by a year to the end of 2023 - just months before the May 2024 European Parliament elections.

If they don’t pass before the elections, they may lapse.

“If [the work programme delay] is approved tomorrow, that is game over for REACH reform and a major blow to the EU Green Deal,” Santos warned.

“We seem set for many more years of rising chemical pollution and the diseases that go with it.

“We hope the Commission will change its mind and decide not to undermine its own legacy in building a better, brighter future for people.”

Does the leaked 2023 EC Work Programme contain other changes?

Instead, they set out an agenda of “securing European competitive advantages” and “reduce burden.”

MEP Maria Arena, a member of the European Parliament Intergroup on Cancer, decried the changes as “unacceptable.”

“Even more worrisome [than the REACH delay] is the deletion of the strengthening of the protection of health and the environment as the overarching goal of the reform only to be replaced by talks of competitiveness and reduction of administrative burden,” she said.

“It seems that the chemical lobbies have won and that the message is clear, the profits of the chemical industry are more important than the protection of European citizens from hazardous chemicals.”

A spokesperson for the EC declined to comment before the new Work Programme had been finalised and adopted.