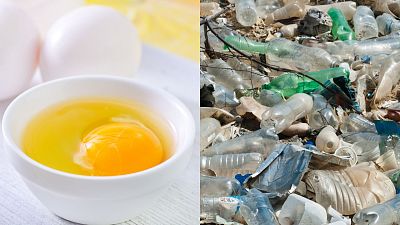 Microplastics pose a nasty threat to human health - but scientists have recruited an unlikely ally in the fight against pollution.   -   Copyright  Canva   -
By Charlotte Elton  •  Updated: 09/11/2022

Eggs can be used to filter microplastics and salt out of water, researchers have discovered.

The humble egg is a staple at breakfast tables around the world.

But it could prove an unlikely ally in the battle against plastic pollution, scientists at Princeton University have found.

According to their ground-breaking new research, freeze dried and super-heated egg whites can remove salt and microplastics from seawater with 98 per cent and 99 per cent efficiency respectively.

“The egg whites even worked if they were fried on the stove first, or whipped," said Sehmus Ozden, first author on the paper published in Materials Today.

How can scientists use egg whites to filter water?

Egg whites are a complex system of almost pure protein.

When they are freeze dried and heated to 900 degrees Celsius in an environment without oxygen, they form an interconnected structure of carbon strands and graphene sheets.

This ‘aerogel’ structure acts like a very tightmesh sieve, sifting nasty microplastics or salt out of the water.

You’ve got to break a few eggs to filter microplastics

The scientists tried a number of different options before they got to eggs.

Professor Craig Arnold - one of the researchers on the paper - found inspiration for the experiments during a lunchtime faculty meeting.

"I was sitting there, staring at the bread in my sandwich," he said.

"And I thought to myself, this is exactly the kind of structure that we need."

The team initially tried to use bread mixed with carbon to filter microplastics. None of these methods worked very well, so the researchers kept removing ingredients.

“It was the proteins in the egg whites that were leading to the structures that we needed."

Are egg whites a scalable solution to microplastic pollution?

Microplastics - tiny particles of plastic up to 5mm long - are everywhere. According to a recent study, people inadvertently consume up to five grams of micro and nano-plastics every week.

The phenomenon could have dangerous health implications.

The tiny particles linger in human blood, lodge in the organs, and pollute foetuses. Emerging research suggests they may be able to induce carcinogenesis in cells, the process that triggers cancerous mutations.

Eggs alone are not going to solve this problem - humans have produced more than 8.3 billion tonnes of plastic since the 1950s.

But if the research group can refine the fabrication process, they could help with water purification on a larger scale.

While store-bought eggs could form part of the solution, the researchers are also looking into producing synthetic proteins with the same filtering qualities.

It could have significant benefits, Ozden says - not least being significantly cheaper than existing options.

“Activated carbon is one of the cheapest materials used for water purification. We compared our results with activated carbon, and it’s much better,” he said.