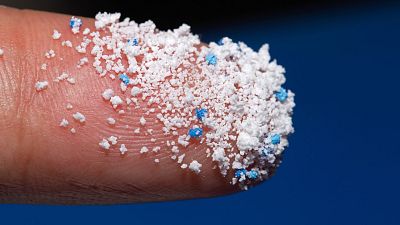 Microplastics are so tiny they can get into our bodies without us knowing - and wreak havoc.   -   Copyright  Canva
By Maeve Campbell  •  Updated: 08/12/2021

Microplastics may be making us more resistant to antibiotics, say scientists in the US.

A study by Rice University in Houston, Texas, looked into the impact of polystyrene on human health. It showed that microplastic particles offer a “cosy” environment for bacteria with high antibiotic resistance to thrive in.

And as polystyrene is pretty much everywhere - in plastic packaging, teabags, clothing and take-away food containers - this means we’re likely ingesting millions of bacteria laced with microplastics.

Worrying research has proved that human organs can absorb microplastics and there is a particular concern for babies, who can have 15 times more microplastics in their bodies than adults.

So if these tiny plastic particles are making their way into our systems and antibiotic-resistant bacteria are hitchhiking with them, it will become harder for our immune systems to combat illness.

How do plastic particles and bacteria mix?

As plastic particles age, they release chemicals that allow antibiotic-resistance genes (ARGs) to spread. These genes are armed with bacterial chromosomes, phages and plasmids, which can spread antibiotic resistance to people, lowering their ability to fight infections.

“Enhanced dissemination of antibiotic resistance is an overlooked potential impact of microplastics pollution.”

Antibiotic resistance is an overlooked potential impact of microplastics pollution.

The study, published in the Journal of Hazardous Materials, found that microplastics ranged in size from 100 nanometres to five micrometres in diameter.

Antibiotic resistance is often attributed to overusing or misusing antibiotics. But this new study suggests resistance also grows without the presence of antibiotics - bacteria can become deadlier due to plastic pollution.