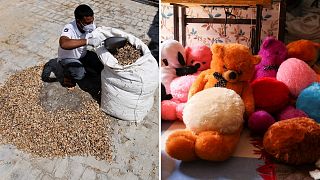 An Indian factory is recycling cigarette butts into stuffing for soft toys.

An estimated 4.5 trillion cigarette butts are littered worldwide each year, 90 per cent of which contain non-biodegradable plastic filters.

Reprocessing them into a range of products, including toys and pillows, is the brainchild of businessman Naman Gupta.

"We started with 10 grams (of fibre per day) and now we are doing 1,000 kilograms... Annually we are able to recycle millions of cigarette butts," he says.

At his factory on the on the outskirts of New Delhi, an all-woman team manually separates the butts into fibre, paper and leftovers.

The paper is converted into a pulp, mixed with an organic binder and turned into burnable mosquito repellant.

The fibre is cleaned and bleached with organic chemicals that neutralise its toxins. The resulting white stuffing is used in soft toys and pillows.

At Gupta'sfactory on the outskirts of the Indian capital, workers also separate out the butts' tobacco, which is turned into compost powder.

His company - Code Effort - has recycled over 300 million cigarette butts from the city streets so far.

Cigarette butts are the most discarded waste item worldwide

Cigarette butts are the most discarded waste item worldwide according to the UN Environment Programme.

Many of these end up in our oceans and on our beaches with disastrous consequences for marine environments.

Cigarette butts ? are the most discarded waste item worldwide & are also the most common plastic litter on beaches, making marine ecosystems more susceptible to microplastic leakages.

Cigarette filters are made out of non-biodegradable cellulose acetate fibres, which break down into microplastics and end up being consumed by marine life and birds.

In Europe, companies like France's MéGo! have also found inventive ways to reuse cigarette butts, recycling them into furniture like tables and benches.

Are floating farms the solution to floods and rising sea levels?