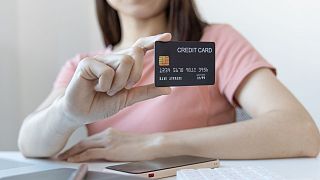 Five grams of plastic particles on average enter the human gastrointestinal tract per person per week. This is roughly equivalent to the weight of a credit card.   -   Copyright  Canva
By Doloresz Katanich  with Reuters  •  Updated: 11/04/2022

A recent study has found that people eat five grams of micro and nanoplastics every week.

From the most remote depths of the ocean, to the deepest section of the lung, microplastics appear to have invaded every bit of our lives, including the human gastrointestinal tract. The Medical University of Vienna has recently published a study in the journal Exposure & Health which suggests that on average, five grams of plastic particles enter the human gastrointestinal tract per person, per week.

Previous studies have already found particles in the human blood and organs. While microplastics have also been found to harm unborn babies.

More than 8.3 billion tonnes of plastic has been produced by humans since the 1950s, 79 per cent of which has ended up in landfill and the natural environment.

They can also enter the body when we drink from plastic bottles, with people who drink 1.5 to 2 litres of water a day from these bottles taking in 90,000 plastic particles per year.

"However, those who choose tap water can, depending on their geographical location, reduce the amount ingested to 40,000 plastic particles," reads the Medical University of Vienna's study.

Another source of these particles are microbeads, which are intentionally used in many health and beauty products.

Research conducted by the NGO Plastic Soup Foundation (PSF) has found that nearly 9 out of 10 cosmetics from leading brands such as L’Oréal Paris, Garnier, Nivea, Gillette, Oral-B, Head & Shoulders and other brands contain microplastic particles. These particles also find their way back to the human body once they get into our waterways.

What health risks have been found?

Whether ingested micro and nanoplastics pose a health risk is being investigated in numerous studies, but is largely unknown to date.

The research team at the Medical University of Vienna has summarised the current state of scientific knowledge in their report, stating that ingested particles passing through the gastrointestinal tract lead to changes in the composition of the gut microbiome.

These changes are linked to metabolic diseases like obesity, diabetes and chronic liver disease.

“The particles can trigger local inflammation and immune response, and nanoplastics in particular have been found to trigger chemical pathways involved in the formation of cancer,” reads the study.

What can you do to avoid particles getting into your body?

Microwaving food in china dishes instead of plastic containers and ventilating your house, are some of the solutions put forward to minimise the ingestion of plastic particles.

Avoiding plastic packaging when buying food can help too. Studies have found particles in teabags and even in precooked rice.

It is also important to drink filtered tap water, as it almost halves the ingested particles compared to bottled water.

Our clothes also release a lot of synthetic particles when washed. A fibre-catching filter in your laundry machine could keep microplastics from washing out. But it is also important to avoid synthetic fibres altogether and instead opt for natural materials like wool, silk, and hemp.

And of course, supporting policies that seek to limit single-use plastics is always important too.

Watch the video above to learn more about the risk of microplastics.

How to prevent your weekly wash from releasing harmful microplastics