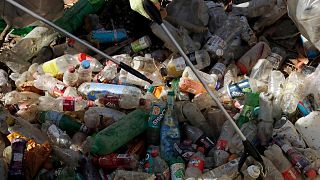 Plastic manufacturers in Germany will soon be forced to pay towards litter collecting.

The bill, agreed by the Cabinet on Wednesday, will require makers of products containing single-use plastic to pay into a central fund managed by the government. It will come into force in 2025.

The fund will collect an estimated €450 million in the first year, based on the companies' past production of single-use plastic. This will contribute to the cost of cleaning up litter in streets and parks.

What makes an item single-use?

Single-use plastics (SUPs) are produced to be used once, for a short period of time, before being thrown away. They include items like take-away containers, food wrappers, carrier bags, coffee cups and plastic bottles.

Because they are used for such a short time, SUPs are more likely to be littered - and many end up in the ocean, where they dissolve into microplastics that are consumed by fish and then humans.

Germany's Environment Minister, Steffi Lemke, says the cost of cleanups in Europe's biggest economy is currently borne by all.

"That should change," she says. "Whoever depends on putting single-use plastic onto the market for their business should contribute to the collection and cleanup costs."

How is Europe tackling its plastic waste problem?

Europe produces around 60 million metric tonnes of plastic every year, but only around 30 per cent of this is eventually recycled. Waste management varies by country, with Germany leading the way by recycling 99.6 per cent of plastic packaging in 2019.

The European Green Deal proposes policies and actions to use plastics in a more sustainable way. This includes the EU-wide Single-Use Plastics Directive, which entered into force in 2019, giving member states two years to start implementing the plan. In early 2022, infringement procedures began for noncompliant countries.

In addition, they must reduce the use of disposable plastic food containers and promote re-usable alternatives, collect 90 per cent of single-use plastic drinks bottles by 2029, ensure bottles contain minimum amounts of recycled plastic, and introduce labelling to inform users of the negative impact of littering plastic items.