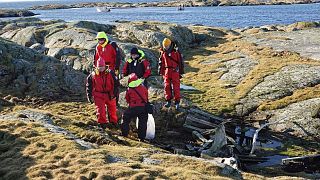 Plastic pollution is an insidious problem the world over, from Mount Everest to the Mariana Trench. The places where plastics amass often suffer the worst environmental problems.

Most of the time, these tend to be ‘agreed’ dumping grounds - but what happens when a pristine nature reserve in Norway becomes one of the most polluted places in the country?

Froan Nature Reserve in Trøndelag is one of the largest coastal reserves in Scandinavia. It is a rich constellation of islets protected in the name of the birds, seals and other animals that nest there. Unfortunately, coastal currents mean that marine litter continuously washes ashore.

Now a research project by the Norwegian University of Science and Technology (NTNU) has mapped plastic pollution for the first time since a clean-up operation began in 2017. 5.5 million litres of marine waste have been collected from the reserve and nearby coastal village of Mausund over the past four years, plus 14,200 kilos of oil, chemicals and other liquids.

Schoolkids, students, politicians, tourists, pensioners, and some diligent members of the local cycling club are among 1,500 volunteers who have joined the colossal de-littering effort.

“This is a big task with a lot of challenges, but we believe in it. It helps that everyone involved in the project feels that we're contributing something positive to the environment," says Odd Arne Arnesen, general manager at Mausund Field Station, whose employees tackle the trash on a daily basis.

Despite some surveys showing that around 70 per cent of this plastic waste has come from abroad, the team is also taking a local view on tackling it at source. “That doesn't mean that the responsibility primarily rests with people in other countries,” Arnesen says.

“A lot of the plastic waste here comes from shipping and local industry, like ropes, fishing gear and building materials. It's not just plastic that drifts ashore.”

What is the environmental impact of this plastic waste?

Perhaps the most troubling finding from the project - published in Science of the Total Environment - is the composition of the soil samples taken from the site. These large chunks, matted with fishing nets and trawls, were found to be around 25 per cent plastic on average, with some up to 72 per cent.

"We calculated that one soil sample of 27 litres, containing 25 percent plastic, would break down to around 530 million microplastic particles," explains NTNU senior lecturer Hilde Ervik. The impact of these tiny microplastics on human health are the subject of numerous, ongoing studies.

But the consequences for Norway’s coastal wildlife are already plain to see. You won’t find any earthworms in the contaminated soil, writes NTNU advisor Steinar Brandslet. And that’s a bad sign.

Other alarming omens can be found in the archipelago’s freshwater sources.

"Drinking water for birds and animals is heavily contaminated," says Ervik. The chemicals that go into plastic to give it its colour, strength and flexibility leach out of the waste polluting the environment around them.

What can be done to restore Norway’s natural gem?

There is an urgency to the clean-up work that goes on at Mausund and Froan Reserve: the marine litter needs to be cleared before it gets buried too far in the ground.

Currently, all of the waste that cannot be recycled - and that’s most of it - gets incinerated. Arnesen acknowledges, "this isn't the best possible sustainable solution, and we hope that we'll eventually be able to put better solutions in place with NTNU.”

Cleaning up by hand is also unsustainable for the team in the long term. They’re now pushing for mechanical solutions to get the ground thoroughly cleaned up so that habitats and species can re-establish themselves.

"In the big picture, the [Norwegian] government and the UN are talking about how pollution will affect the continued existence of the world's oceans, yet after several years of clean-up work, we're still doing 100 percent of it manually.

“That can't continue—we need to go to work with new technological and industrialised solutions," says Arnesen.