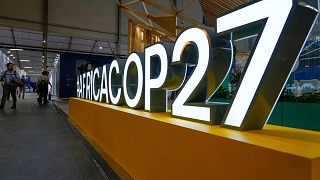 Opening speeches set the stage for the most important issues amid multiple global crises from Russia’s invasion of Ukraine to the growing cost of living.

Here are some of the biggest takeaways from the second day of the conference:

1. Activists are being sidelined in Egypt

After warnings that protest would be sidelined at COP27, activists say they have been shut out of sharing their stories at the UN climate conference.

Ugandan activist Nyombi Morris says he and fellow campaigners are being denied access to negotiating tables and pushed to the fringes of the event.

“We came to represent hundreds and hundreds of thousands of people,” he told Euronews Green.

“But they are not allowing us to enter the room or share our stories.”

Morris was invited as an observer to the conference but is now wondering what he is doing in Egypt.

“I wanted to share my story as a climate migrant.”

“As participants are arriving for COP27, it is becoming clear that Egypt’s government has no intention of easing its abusive security measures and allowing for free speech and assembly,” says Adam Coogle, deputy Middle East and North Africa director for the NGO.

Human Rights Watch added that dozens of people were arrested for calling for protests and demonstrations have been heavily restricted in the run-up to the event.

2. Climate compensation is on the agenda for the first time ever

The opening of COP27 was delayed by disagreements over whether climate compensation should be formally discussed this year. But, for the first time in history, funding for loss and damage has made it onto the agenda in Egypt.

Vulnerable nations most affected by climate change have been pushing for discussions around climate compensation for years.

President of Senegal and President of the African Union Macky Sall told the conference that COP27 was a chance for countries to either “make history” or “be a victim of history”.

Those who pollute the most, Sall said, should “pay the most in order to get our planet off this track of climate crisis.”

Rich nations have resisted due to fear that it could open them up to liability for historic emissions and other injustices.

After last minute talks over the weekend - where rich countries were accused of bullying - loss and damage made it onto the agenda for the start of the UN climate conference.

COP27 President Sameh Shoukry said it had been recognised by a “vast majority of the international community” as “a very fundamental issue”.

3. A global warning system against extreme weather for everyone

The UN has unveiled a plan to create an early warning system against extreme and dangerous weather for everyone on Earth.

It will cost €3.1 billion - the equivalent of just €0.50 cents per person per year for the next five years. The plan was created by the World Meteorological Organisation and is supported by a joint statement from 50 countries

“The Action Plan launched sets out the way forward to right this wrong, and protect lives and livelihoods.”

He added that UN governments and partners like the WMO will work together to achieve this goal within five years. They will address gaps across four key pillars of early warning systems: understanding disaster risk, monitoring and forecasting, rapid communication and preparedness and capacity to respond.

4. We’re on a ‘highway to climate hell’, warns UN chief

In his speech at the opening ceremony, United Nations Secretary-General Antonio Guterres warned countries to work together now to cut emissions or condemn future generations to climate catastrophe.

It set the tone for two weeks of negotiations where governments will attempt to navigate climate change amid a myriad of other global challenges.

Guterres called for a pact between the world’s richest and poorest countries to accelerate the transition from fossil fuels as well as ensure developing nations can reduce emissions and cope with climate impacts.

"We are on a highway to climate hell with our foot on the accelerator."

More than 140 countries pledged to end deforestation by 2030 at COP26 last year. It was praised as one of the big announcements from last year’s summit.

But according to experts, little has been done to pass new conservation laws or finance measures needed to protect forests since then.

On Monday more than 25 countries - accounting for 35 per cent of the world’s forests - launched the Forest and Climate Leaders’ Partnership (FCLP). The aim is to accelerate momentum to halt and reverse forest loss and land degradation by 2030.

The initial co-chairs of the FCLP will be the United States and Ghana but the list also includes the UK, Japan and Pakistan. This group aims to meet twice a year to track progress on deforestation targets.

“This partnership is a critical next step to collectively deliver on this promise and help keep the goal of limiting global warming to 1.5C alive," said COP26 President Alok Sharma in a statement.

Euronews Green will be publishing the five key takeaways every day from COP27. Check back in tomorrow for more.

COP27 must be about implementing climate promises - Michel