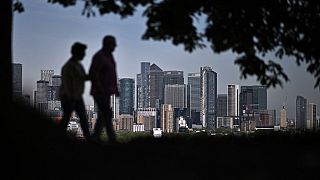 Walkers stroll in Greenwich Park with London's secondary central business district of Canary Wharf seen behind in the spring sunshine on May 6, 2022.   -   Copyright  BEN STANSALL/AFP or licensors
By Joshua Askew  •  Updated: 08/11/2022

Billionaires are responsible for a million times more greenhouse gas emissions than the average person, according to Oxfam.

Research by the international charity found that the investments of just 125 billionaires emit 393 million tonnes of CO2 each year, equivalent to the yearly emissions of 85 million cars.

This is one million times more than someone in the bottom 90 per cent of humanity. Everyone who earns below €173,000 on average is in this group.

The report comes amid calls for the world’s ultra rich to shoulder more of the financial responsibility for tackling the climate emergency at COP27.

On Monday at the summit in Egypt, the Bezos Earth Fund – set up by billionaire Amazon founder Jeff Bezos – pledged €1 billion by 2030 to help protect carbon reserves and biodiversity.

However, Andrew Steer, CEO of Bezos's philanthropic organisation, previously said billionaires should not be expected to make up for climate finance gaps left by rich countries.

The report on the emissions of the world’s richest people was based on a detailed analysis of the investments of 125 of the world’s wealthiest billionaires. Collectively they have a €2.4 trillion stake in 183 companies.

It found that these billionaires' investments produce an annual average of 3 million tonnes of CO2 per year, compared to the figure of 2.76 tonnes for the average person in the bottom 90 per cent.

Carbon dioxide is the most significant greenhouse gas, fuelling rapid global warming by absorbing and radiating heat into the atmosphere.

“These few billionaires together have ‘investment emissions’ that equal the carbon footprints of entire countries like France, Egypt or Argentina,” said Nafkote Dabi, Climate Change Lead at Oxfam.

“The major and growing responsibility of wealthy people for overall emissions is rarely discussed or considered in climate policy-making. This has to change,” she added.

The real carbon emissions of billionaires could be bigger

Oxfam’s report cautioned that the actual amount of polluting emissions created by the world’s ultra rich is likely to be much higher in reality. Carbon emissions published by companies tend to systematically underestimate their true carbon impact.

It added that “billionaires and corporations who do publicly reveal their emissions … are likely to be those with a high climate impact.”

These individuals were not included in the research, due to the lack of concrete data.

According to Oxfam, the super-rich need to be “taxed and regulated away from polluting investments that are destroying the planet”.

They estimated that a wealth tax on the world’s billionaires could raise €1.4 trillion a year, which could help developing countries – the worst hit by the climate crisis.

Billionaires back voluntary initiatives at COP27

At COP27 some billionaires have announced their own voluntary initiatives, though others have voiced complaints.

Bezos's Earth Fund so far has pledged 30 per cent of its €10-billion fund toward nature conservation, restoration and food-systems transformation.

It is seeking a coalition with African and European countries at the UN’s climate summit in Egypt to help with land restoration.

Speaking to the Guardian on Monday, head of Bezos’s environmental fund Steer said philanthropy should not fill in the funding gaps left by rich nations who fail to fulfil their financial promises.

Issues around the responsibility for damages caused by climate change and crucially who will pay to fix them are a key issue at this year’s COP.

“We want to resist simply replacing [government money]. That would not be good,” Steer said.

“I don’t think we should buy into the idea that we are somehow an alternative to government, because governments have an obligation and they are not living up to it to the extent they should.”

Oxfam maintains that corporations must put in place ambitious and time-bound climate change action plans, while governments need to tax the global elite who are investing in polluting industries.

“We need COP27 to expose and change the role that big corporations and their rich investors are playing in driving the climate crisis by profiting from pollution,” Dabi said.

“They can’t be allowed to hide or greenwash.”