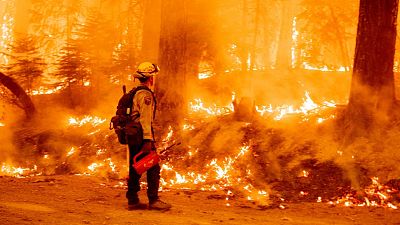 The findings of the IPCC’s latest “code red for humanity” report made for alarming reading for many of us.

Visions of wildfires in Greece and flooding in Italy have pushed people to reassess their once-safe homes and how they could one day be affected by the consequences of climate change.

There are several debates about when parts of our planet will become uninhabitable, if we don't sufficiently combat the climate crisis.

Wildlife-rich areas such as The Amazon, Miombo Woodlands in Southern Africa, and southwest Australia will be among the most affected places in the world for animal species, says the WWF.

But what about the human cost of this problem?

Vulnerable, high-risk nations have warned they are on the "edge of extinction" in the event of zero action.

It’s a worst case scenario outcome, but one we have to consider.

We have been presented with a unique situation in which some parts of the earth will suffer greater consequences than their neighbouring countries, whether that is because of extreme weather conditions, rising sea levels, or droughts.

Here are the countries facing the world’s greatest climate threats, and why they are at risk.

Vulnerable, high-risk nations have warned they are on the "edge of extinction" in the event of zero action.

From flooding: The Maldives

One study predicts that many low-lying islands could be uninhabitable by 2050 if serious changes are not made to slowing down our rising sea levels. This is expected to, and in some ways already has, hit places like Haiti, Fiji, and the Philippines.

However, there is no more at-risk archipelago in the world at the moment than the Maldives. More than 80 per cent of its coral islands stand at a miniscule 30 centimetres above sea level, making it incredibly susceptible to even the slightest increase in rising temperatures.

“We are paying with our lives for the carbon someone else emitted," Mohamed Nasheed, a former Maldives president, told the BBC in the wake of the IPCC’s latest report.

Tens of thousands of the country’s residents have flocked to Hulhumalé, a man-made island with a large surface area that was purposely constructed at around 2 meters above sea level to avoid any dangerous future consequences.

It is expected that over 200,000 people will relocate there in the coming years, in order to take the pressure off the island’s already-stretched capital, Malé.

From overheating: The United Arab Emirates

Residents and tourists visiting the UAE will tell you just how hot it is there. Average summer temperatures in the desert climate are known to hit up to 50°C with zero rainfall.

Experts at the Massachusetts Institute of Technology (MIT) believe that the country's current record temperatures will become commonplace by 2070, with a “regional hotspot” in its capital, Abu Dhabi.

This area, along with several others dotted around the Arabian Gulf, suffer from combined dangers of both temperature and humidity that creates a phenomenon called wet bulb temperature (WBT).

Our impending crisis means this situation is expected to worsen over time to the point where it will be impossible for even the most heat-acclimated individuals to survive living there.

Each person has their own survival limitations, but it is believed that the average person would likely go into shut-down mode after 10 minutes of exposure to temperatures exceeding 60°C.

A decade of rapid development and soaring tourism has created an infrastructure where all indoor spaces are temperature controlled for people’s comfort - this will not be enough in the future, rendering a prosperous country unliveable.

The Germanwatch Institute publishes an annual Global Climate Risk Index that tracks who is most in danger from weather-related “loss events”.

They presented their findings at the COP25 climate conference in Madrid last year, revealing that Japan is currently the most at-risk country for extreme weather deaths, following a series of extreme circumstances that reached their boiling point in 2018.

During this time, the country suffered typhoons, heatwaves, mudslides, and flash floods that were responsible for 1,282 deaths on the island - 1.01 per 100,000 inhabitants.

This culminated in Typhoon Jebi, the most extreme weather event the country had seen in over 25 years that amassed €11 billion in damages.

These events have led to millions of Japanese citizens having to evacuate from homes they often had little chance of returning to. Germanwatch’s findings assert that should these events happen at a higher frequency, or larger scale, the country would cease to be a safe place to occupy.

Much of the African continent relies on agriculture for both the sustenance of its population and it’s economy via trade.

Climate change and other human factors are responsible for driving food insecurity in places like Malawi and Zimbabwe, but The World Bank places Sudan as the most pressing victim of this problem.

Five years ago it was reported that Sudan was facing a "hugely complex emergency situation” due to irregular crop supplies and this has only worsened.

"Communities who are already very vulnerable - who are already suffering from impoverishment, who may be in areas that may be affected by climate change - are pushed to the limits of their coping mechanisms," explains Michelle Yonetani, a senior advisor on disasters from the Internal Displacement Monitoring Center.

"Drought aggravates desertification which affects the savannah belt in the northern region - so these encroaching deserts have been displacing entire villages."

Sudan has a longstanding relationship with droughts that spanned much of the 20th century, but much of the country is once again becoming unsuitable to sustain its crops and animals due to erratic weather patterns catalysed by climate change.

Over 80 per cent of the country’s population lives in rural areas that depend heavily on agriculture and livestock. Sudan holds one of the largest livestock populations in the continent consisting of cattle, sheep, goats, and camels.

Any disruption of this ecosystem would prove devastating for Sudan’s population and lead its people into serious problems, establishing the North African region as a no-go zone for any quality of life.