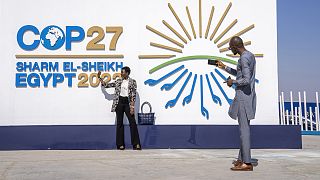 Envoys from around the globe gathered Sunday in the Egyptian seaside resort of Sharm el-Sheikh for COP27. These talks on tackling climate change are taking place as the world grapples with multiple crises, including the war in Ukraine, high inflation, food shortages and an energy crunch.

Guterres implored all countries to find a way to put the world back on track to cut emissions and help poor nations cope with the impacts of global warming.

More than 40,000 participants have been registered for this year's talks, reflecting the sense of urgency as major weather events around the world impact many people and cost billions of dollars in repairs.

Egypt said over 120 world leaders would attend, many speaking at a high-level event from 7 to 8 November.

While US President Joe Biden was expected at the summit, many top figures, including China's President Xi Jinping and Indian Prime Minister Narendra Modi were not planning to come.

This has cast doubt on whether the talks in Egypt could result in major deals to cut emissions without two of the world's biggest polluters.

Germany's foreign minister, Annalena Baerbock, said the talks were being overshadowed by Russia's attack on Ukraine, which has triggered political and economic upheaval around the world.

"2022 must not become a lost year for climate protection," Baerbock said in a statement.

"For many states, it's about the survival of their population and their culture. For them, the climate crisis remains the most important security issue, not Russia's war in Europe."

Baerbock said Germany was willing to show solidarity with poor countries, including on the thorny issue of loss and damage - compensation for losses resulting from climate change caused by rich countries' emissions.

Rights groups criticised Egypt on Sunday for restricting protests and stepping up surveillance during the summit.

"It is becoming clear that Egypt's government has no intention of easing its abusive security measures and allowing for free speech and assembly," Adam Coogle, the group's deputy director for the Middle East and North Africa, said in a statement.

Human Rights Watch said it had joined about 1,400 groups from around the world urging Egypt to lift the restrictions on civil society groups.

Alaa Abdel-Fattah, a prominent imprisoned pro-democracy activist, escalated his hunger strike Sunday on the first day of the COP27, according to his family.

Concerned that he could die without water, she was calling for authorities to release him in response to local and international calls.