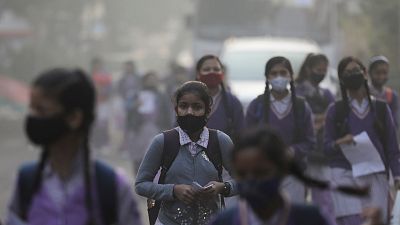 India has called on rich countries to fulfil a decade-old promise to provide $100 billion in annual climate finance to developing nations.

In 2009, a coalition of economically developed countries - including the USA, France, Germany, and the UK - pledged to give climate change-impacted nations $100 billion (€101 billion) per year by 2020.

This promise has not been met, India’s government said on Friday - and needs to be increased.

"The goal of $100 billion per year of climate finance by 2020 and every year thereafter through till 2025 is yet to be achieved," the government said in a statement ahead of the COP27 event in Egypt, which begins on Nov 6.

"While the promised amount must be reached as quickly as possible, there is a need now to substantially enhance the ambition to ensure adequate resource flow under the new quantified goal post-2024."

The commitment has still not been met, generating mistrust and reluctance among some developing nations to accelerate their emissions reductions.

What is India's government urging rich countries to do?

India is the world's third largest emitter of greenhouse gases after China and the United States - though it is much lower down the rankings of emissions per capita, according to Our World in Data. The calculations also change if you take into account historical emissions.

It has been ramping up its share of renewable energy, but coal continues to be India's main fuel for power generation, as the country strives to provide energy for its 1.4 billion people using a cheaper fuel.

In order to transition to cleaner energy, it requires aid from overseas.

Two Indian government sources told Reuters earlier this week that India had already initiated steps such as meeting half of its energy demand from non-fossil fuels and building 500 gigawatts of non-fossil energy capacity by 2030.

"Developed countries also need to realise that overall costs have gone up, so the pledge to provide $100 billion per year cannot be static. It needs to go up," a government source had said.

Why have New Delhi schools closed?

The pledge comes as worsening air pollution forces schools to shut in New Delhi. City authorities ordered primary schools to shut from Saturday, and told schools to stop outdoor activities for older children as air in the world's most polluted capital had become a severe risk to health.

Delhi environment minister Gopal Rai said going forward 50 per cent of Delhi government employees would be told to work from home, and he urged private firms to take similar steps.

According to data compiled by the Swiss group IQAir, New Delhi has been the world's most polluted capital for the past four years.

A filthy smog forms over the Indian capital every winter as cold, heavy air traps construction dust, vehicle emissions and smoke from crop stubble burning in neighbouring states, causing a surge in respiratory illnesses among the city's 20 million people.

Air pollution can have serious consequences for human health, contributing to respiratory disease and cancers.

India's federal pollution control board has banned the entry of diesel trucks carrying non-essential goods into the capital, while Delhi's administration suspended most construction and demolition work in the region earlier this week.