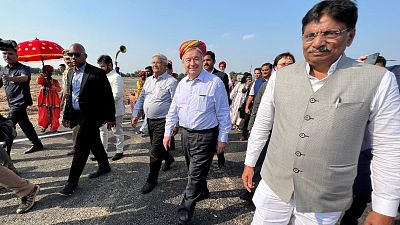 India’s first solar-powered village is setting an example of “reconciliation between humankind and planet” according to UN Secretary-General Antonio Guterres.

The UN chief visited Modhera in Gujarat, India yesterday as part of a three-day trip to the country. A solar power project commissioned in 2021 has provided its thousands of residents with more than enough renewable energy to power their homes.

The village now has around 12 hectares of land covered with solar and rooftop panels on roughly 1,300 homes generating 1kW of energy. This is more than the people who live there use on a daily basis, meaning energy can also be fed back into the electricity grid.

According to the Government of Gujarat, residents of the village could save between 60 and 100 per cent of their electricity bills.

Modhera’s new ‘Temple of the Sun’ is solar power

On Thursday, villagers told Guterres that they were saving on their energy bills and are happy to use clean energy that doesn’t harm the environment. The UN Secretary-General visited Modhera’s centuries-old sun temple, referencing the link between its ancient history and present innovation.

“One thousand years ago, the ancestors of those that live today in this village built this marvellous Temple of Sun,” he said.

“And they did it recognising that the origin of all energy that we have on Earth comes from the sun.”

He added that in this place where the sun temple was built 1,000 years ago, there was a new “Temple of the Sun” that was “based on solar energy and the fact that solar energy is transforming the lives of the people of this village.”

Guterres said that the solar power project was making Modhera “more healthy, giving them more prosperity, but at the same time contributing to rescue our planet from a climate change that is still rising without control.”

Watch: The moment a bridge collapses in India, killing at least 134