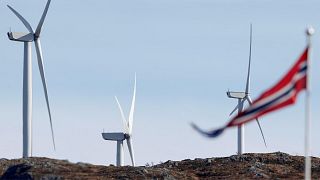 Norway has raised its target for cutting climate-related emissions to at least 55 per cent by 2030 but says it won’t dismantle its oil industry.

The government announced its new commitment in a statement on Thursday just three days before the start of COP27 in Egypt. Its previous goal was to cut emissions by between 50 per cent and 55 per cent before the end of the decade.

Though Norway is not a member of the European Union, the updated emissions target aligns the country with those set by the 27-nation bloc. This strengthened climate commitment comes after calls at COP26 last year for countries to tighten their targets.

"This sends a strong signal to other countries, and we hope that more will up their targets," said Prime Minister Jonas Gahr Støre.

Climate and Environment Minister Espen Barth Eide said that all parts of society must contribute if Norway is to succeed.

Støre also said that having a good plan was just as crucial as setting targets. The government announced that it will put together climate plans every year to clearly show how it intends to achieve its goals.

Norway has a long way to go to meet climate targets

Last week, the UN said that current climate pledges from governments leave the world on track to warm by as much as 2.6 degrees Celsius. It warned that emissions must fall by 45 per cent by 2030 to limit this disastrous climate change.

And as the Prime Minister announced the new targets, Statistics Norway reported that the country’s greenhouse gas emissions fell by just 0.7 per cent in 2021. If the government is to achieve the new goal it will need to cut ten times this amount every year for the next eight years.

Norway has so far cut just 4.7 per cent of emissions compared to 1990.

“There is no doubt that it will require a lot from us,” Støre told the press conference on Thursday.

Norway is the largest oil producer in Western Europe and has become a leading supplier following Russia’s invasion of Ukraine. The country’s Labour Party and Centre Party have ruled out dismantling the oil sector.

Støre told a news conference that the “demand for fossil fuel energy will fall and renewable energy production must increase.”

“This has to go hand in hand.”

He added that the planet will still need oil in the future, arguing that it was “not a bad thing that some of it comes from the Norwegian continental shelf, which has the lowest emissions.”