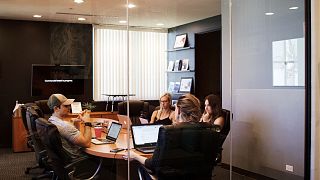 Winter is on the horizon, and while it’s never an especially cheerful time, the looming energy crisis is making the forecast feel that bit bleaker this year.

While it’s not going to be a great season for anyone, it will also have a significant impact on the 40 per cent of adults in the UK who now work remotely or on a hybrid contract as energy bills rise.

Now, we’re left questioning whether, actually, commuting costs and coffee breaks will work out as the more financially viable option than staying at home.

How is the energy crisis impacting UK households?

The ongoing crisis started with the pandemic; gas use rose during COVID-19, and due to discrepancies between supply and demand and a cold winter in 2021, approximately 30 UK energy suppliers went bankrupt last year.

Since then, Russia’s invasion of Ukraine has seen gas prices increase further due to disruptions and trade sanctions against Moscow.

This month, household energy bills in the UK have risen by 80 per cent, on top of a 54 per cent increase earlier this year.

While former UK prime minister Liz Truss had promised the rise will be capped at £2,500 (€2,880), the Conservative government has since backtracked on the cap being a two-year guarantee and instead advised it will end as early as April 2023 - meaning households of all shapes and sizes are only covered for this winter.

How is the energy crisis impacting workers?

According to research from Theta Global Advisors, the rising cost of living is further fuelling movements like “quiet quitting” and the Great Resignation.

The study shows that almost half (46 per cent) of the British workforce, for example, have said their employer has not done enough to help them with the current cost of living.

“This is resulting in an increasing number of people ‘quiet quitting’ in search of more support elsewhere,” Theta CEO Chris Biggs explained.

The research also found that, with price points relentlessly rising across multiple sectors, 30 per cent of British workers say they can no longer comfortably afford to commute to work.

So, what does it all mean for the people who remote work?

Despite the stats, the research also adds that 39 per cent of Brits say that even with the cost of living crisis, they would still prioritise flexible and home working over higher pay.

This winter, people are having to weigh up what’s more cost-effective: staying at home to save on the commute or footing the extra bills incurred from using your home’s resources throughout the working week.

“Some of our local hotels are doing a £9.95 (€11.45) deal where you can use the space, WiFi and get unlimited tea and coffee for the day plus soup and sandwiches at lunchtime,” he said.

“Not only is it nice to have a change of scene, but it saves us a fortune on energy”.

According to Briggs, “finding alternative incentives that support employees’ financial, physical and mental wellbeing will be crucial for companies” as the cost of living, particularly heating, continues to rise.

Holyoak and his wife, who is expecting a baby, live in a two-bedroom property.

“We had a high chance of twins so thank God there’s only one coming with all the bills going through the roof”.

What does it mean for offices if more people are returning?

The move to hybrid working has in turn induced a shift to more collaborative office spaces, with tools like hot desking, communal areas and fewer individual desks.

“Over the course of the last few years, many of us have become used to having more autonomy over the way we work,” Jitesh Patel, CEO of Peldon Rose and a leading office design expert in London, explained.

With more people forecast to head back to the office over the coming weeks, there are questions around how these new spaces can adapt to a higher capacity of workers - and their individual needs.

“It’s vital that businesses are prepared for an influx of staff this winter, and that office spaces are fit-for-purpose,” Patel adds.

“By facilitating a mix of quiet spaces for concentration and more social collaborative areas, business leaders can not only boost efficiencies but also keep their people happy”.

Will you be returning to an office this winter to save on energy bills? Tell us on Twitter @euronewsnext