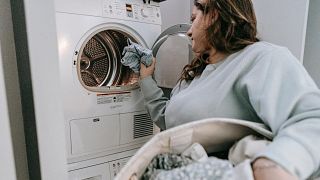 Discounts could be given for avoiding high-power activities like washing clothes.   -   Copyright  Canva
By Rosie Frost  •  Updated: 21/10/2022

People in the UK are being offered discounts on their energy bills if they avoid high-power activities during peak times this winter.

The National Grid ESO has just raised discounts for households that cut their energy use during times of peak demand. From November, they could be paid £3 per kilowatt hour instead of the previous rate of 52p, according to the operator.

High demand activities include tasks like cooking or using the washing machine, and peak hours in the UK are between 5pm and 8pm when it begins to get dark outside.

“Businesses and homes can become virtual power plants and, crucially, get paid like one too,” Fintan Slye, director of the National Grid ESO, wrote in the Guardian.

“For a consumer that could mean a typical household could save approximately £100 (€114) [this winter],” he said in the article.

“Industrial and commercial businesses with larger energy usage could save multiples of this.”

The discount will only be open to households that use smart meters - a total of around 14 million homes in the UK.

Two UK energy companies, E.On and Octopus Energy, have already said that the 52p refund rate was too low to encourage people to reduce energy use. They are reportedly interested in taking part in the discount scheme following a trial earlier this year.

The call to reduce energy consumption during peak times comes as countries across Europe prepare for blackouts this winter.

In the “worst case scenario”, if Russian gas supplies are cut off, Britain could see three-hour blackouts. The National Grid warned earlier this month that in the “unlikely event” that there was a shortage of supplies, some households could have their electricity shut off to “ensure the overall security and integrity of the electricity system across Great Britain”.

The company still expects that there will be enough energy to provide homes across the country with electricity this winter.

The EU is also introducing measures to reduce energy consumption during peak hours with governments throughout the bloc announcing plans to cut electricity use.

In France, for example, heating and lighting are being reduced in government offices and work from home is being encouraged. They are hoping that the example set by this “energy sobriety” will encourage citizens to follow suit.