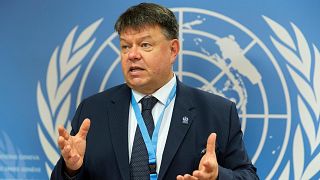 Petteri Taalas, Secretary-General of the WMO, says the war in Ukraine is accelerating the development of and investment in green energies over the longer term.   -   Copyright  Salvatore Di Nolfi/Keystone via AP
By Angela Symons  & Jamey Keaten  with Associated Press  •  Updated: 12/10/2022

The war on Ukraine "may be seen as a blessing" from a climate perspective, says the head of the UN weather agency.

The comment from Petteri Taalas, secretary-general of the World Meteorological Organization, refers to the acceleration in green energies prompted by war-related fuel shortages.

Last month, head of the International Renewable Energy Agency (IRENA) Francesco La Camera made similar comments - albeit with a better choice of words.

"In the mid- and long term, the Ukraine crisis will bring an acceleration to the energy transition because governments finally realise that going for renewables is not only good for the environment, jobs, GDP, but also good for ensuring higher energy independency," La Camera said.

Although some countries have quickly turned to fossil fuels to meet surging demand, rising prices have also made renewable energies like solar, wind and hydrothermal more competitive in the energy marketplace.

The energy crunch has also led many big consuming countries in Europe and beyond to initiate conservation measures, and talk of rationing has emerged in some places.

Why did Taalas refer to the war on Ukraine a 'blessing'?

Economic sanctions against key oil and natural gas producer Russia are behind the surge in gas and energy prices.

This has prompted an upturn in the use of fossil fuels, and has been a "shock for the European energy sector", according to Taalas.

"From the five-to-10-year timescale, it's clear that this war in Ukraine will speed up our consumption of fossil energy, and it's speeding up this green transition," he said.

"So we are going to invest much more in renewable energy, energy-saving solutions," and some small-scale nuclear reactors are likely to come online by 2030 as "part of the solution", he said.

"So from a climate perspective, the war in Ukraine may be seen as a blessing," Taalas added.

Various UN leaders, including UN Secretary-General Antonio Guterres, have previously highlighted the lessons to be taken from the conflict's ensuing energy crisis.

"As well as the tragic human impacts, the conflict underscores the rising costs of the world's fossil fuel addiction, and the urgent need to accelerate the shift to renewables, to protect people and planet," UN spokesman Stephane Dujarric said.

Taalas was speaking as WMO issued a new report that said the supply of electricity from cleaner sources of energy needs to double within the next eight years to curb an increase in global temperatures.

The latest "State of Climate Services" annual report - based on contributions from 26 different organisations - focuses this year on energy.

Taalas said the energy sector currently is responsible for about three-quarters of emissions of heat-trapping greenhouse gases, and he called for a "complete transformation" of the global energy system.

He warned that climate change is affecting electricity generation - and it could have an increasing impact in the future. Among the risks, nuclear plants that rely on water for cooling could be affected by water shortages, and some are located in coastal areas that are vulnerable to sea-level rise or flooding.

In its report, WMO noted that in 2020, some 87 per cent of global electricity generated from thermal, nuclear and hydroelectric systems - which produce less CO2 than plants run by fossil fuels - depended on water availability.