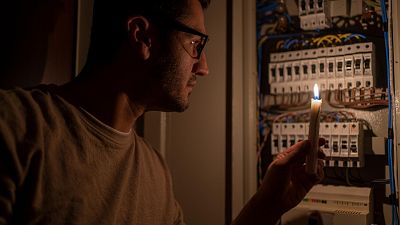 Homes in the UK could face a series of three-hour power cuts if gas supplies from Russia are shut off, the National Grid has warned.

The company says in the “unlikely event” that there is a shortage of supplies, some customers could have their electricity shut off to “ensure the overall security and integrity of the electricity system across Great Britain".

The National Grid adds that power cuts would be a worst-case scenario. This would entail a particularly cold snap combined with reduced electricity imports from Europe and insufficient gas for power plants to run.

Gas power stations make up around 40 per cent of the UK’s electricity mix but the country is not as reliant on Russian sources as other European nations. Some of the UK’s energy is also imported from continental Europe which is where problems could arise

National Grid says if the energy crisis means Britain can no longer import electricity from France, the Netherlands or Belgium, then this could lead to shortages.

The company still expects that there will be enough energy to provide homes across the country with electricity this winter, however.

Could the rest of Europe also face blackouts this winter?

European Union member states are also preparing for energy shortages this winter as the crisis brought on by the Russian invasion of Ukraine continues.

“Extraordinary measures” have just been formally agreed including a voluntary 10 per cent cut in electricity consumption and a mandatory 5 per cent cut during peak hours for EU nations.

“Member states will identify 10 per cent of their peak hours between 1 December 2022 and 31 March 2023 during which they will reduce the demand,” the European Council said.

They will be free to choose the appropriate measures to reduce energy consumption for both of these targets.

On Thursday, the French government announced a package of measures as part of its ongoing plan to reduce energy consumption. Though gas reserves in the country are currently at 100 per cent, there are still concerns that this might not be enough to make it through to next year if the weather is particularly cold.

To avoid shortages, heat and lighting are being reduced in government offices and remote working is being encouraged. The government hopes that citizens and businesses will voluntarily follow suit.

He said that the European Commission was considering two different scenarios in its preparations. This includes one or a small number of states facing “a minor incident such as a blackout” or a large number of countries all facing energy shortages.

The EU is trying to “anticipate crises” this winter instead of reacting in the event of an emergency, Lenarčič said, after learning from the experiences of the COVID-19 pandemic.