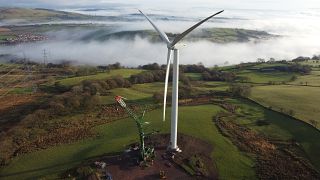 Whether you’re conscious about your carbon emissions or just want to reduce your energy bills, moving away from traditional gas and oil is an increasingly attractive prospect.

Unless you can afford to install a solar panel, choosing an energy supplier with an environmental pledge appears to be the only option for greener energy.

That was until Sarah Merrick from Ripple Energy started helping people to co-own a wind turbine.

“I could see that wind had become the UK's cheapest source of electricity but there wasn't really any way for anyone to get involved,” she tells Euronews Green.

“Big projects are cheaper than small projects so that's why buying a little bit of a wind farm is over two thirds cheaper than buying the equivalent rooftop solar scheme.”

How can I own a wind turbine?

First of all you need to decide how much of your electricity bill you want to be covered by wind power.

To cover the entire electrical consumption of the average three-bedroom home in the UK, it costs around £1,700 (€1,937). However you can choose to buy just a percentage of your usage with shares of the wind farm starting from £25 (€28).

This is a one-off payment, which can be spread over 12 months, and you’ll own your share for the entirety of the turbine’s 25 year life span.

Each time Ripple opens a new project, people opt in with their chosen investment until the turbine is fully funded. With all the co-owners secured, Ripple then builds the turbine and after a short wait, the members are able to start using their green energy to save money on their monthly bills.

Public-owned wind farms are cropping up across the UK

Ripple’s first project was one single turbine in Wales. Though it might not sound like much, one rotation of the turbine’s blades creates enough energy to power a home for eight hours, and 900 people were able to sign up to co-ownership.

Their second project, based in Scotland, is now fully funded and on the verge of construction. This time it’s a much bigger project with eight turbines, 5,600 co-owners and 19 business members.

Though the projects so far are in Wales and Scotland, you don’t need to live nearby to become a member and benefit from a turbine’s energy.

Plus, because unlike a solar panel, you’re not attaching anything to your home, it doesn’t matter if you’re a renter or want to move house. Your green energy can move with you, just like a normal energy supplier.

Wind farm co-owners do not get free energy, but instead receive credit on their account each month, when supplied by one of Ripple's partner energy suppliers.

Ripple estimates your bill will be around 23 per cent cheaper overall. And with traditional energy costs increasing exponentially, this saving is becoming even greater.

“In terms of getting your initial investment back through your savings, it completely depends on the electricity price,” Sarah explains.

“When we launched our first wind farm, we were expecting it to take 13 or 14 years [to get your investment back] but since we launched the prices have gone so high [that] it's actually looking like the costs could be paid back through savings in maybe four years instead.”

Watch the video above to learn more about owning a bit of a wind farm.