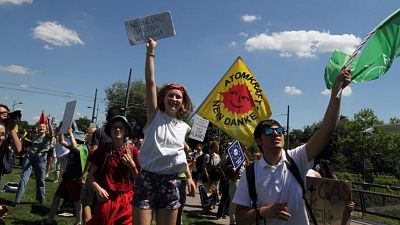 Ukraine’s most famous celebrities, human rights activists and environmental campaigners are calling for gas to not be classified as a green energy source in the EU.

Influential figures and stars, including 2016 Eurovision winner Jamala, have come together to ask MEPs to vote against the EU Commission’s taxonomy on sustainable activities. They say that it will increase Europe’s dependence on gas, particularly from Russia.

Before the invasion of Ukraine, Russia supplied 40 per cent of the EU’s natural gas and 27 per cent of imported oil, with the bloc paying an estimated €400 billion a year.

According to the group of TV stars, singers, artists, activists and influential figures, any measure which prolongs the EU’s reliance on Russian gas will only “strengthen Vladimir Putin’s grip on power and extend his reign of terror.”

Since the war in Ukraine began, the EU has spent more than €60 billion on Russian fossil fuels, according to campaign group Europe Beyond Coal.

Will the EU taxonomy increase Europe’s dependence on Russian gas?

The European Parlaiment decide today (6 July) whether to block or accept a new EU law that labels investments in gas and nuclear as climate friendly. This 'taxonomy' dictates which economic activities investors can label and market as green in the EU.

But critics say the inclusion of gas as a “green investment” creates uncertainty about what is truly sustainable.

“When the European Commission released its REPowerEU strategy, the aim was to respond to the ‘double urgency’ of dependence on Russia and climate change,” says Oksana Ananyeva, policy advisor at the Centre for Environmental Initiatives in Ukraine.

New investments [...] will open the door to the Russian energy giants, which should be sanctioned.

“Greenwashing” nuclear energy and gas using the EU taxonomy, she adds, is a step in the opposite direction.

“New investments in these technologies do not make either environmental or economic sense, but will open the door to the Russian energy giants, which should be sanctioned.”

In June, a preliminary vote saw the EU’s taxonomy struck down by two key parliamentary committees: The Economic and Monetary Affairs Committee and the Environment, Public Health and Food Safety Committee.

It is expected to be a tight vote and according to a recent survey by WWF, almost half of EU citizens believe Russia's invasion of Ukraine means it is even more important to leave gas out of the EU taxonomy.

Now campaigners are calling for MEPs to continue the momentum by rejecting the proposal and forcing the European Commission back to the drawing board.

‘The greatest greenwashing exercise of all time’

An estimated 300 activists are gathering in Strasbourg, France this week as the results of the vote on the taxonomy are due to be announced. They come from countries across the EU including Austria, Denmark, Italy, Sweden and Ukraine.

The activists will communicate directly with MEPs, calling on the European Parliament to stop “the greatest greenwashing exercise of all time” by rejecting the inclusion of nuclear and gas in the EU taxonomy.

“The European Commission is trying to convince us that gas is green and that gas hasn’t been fuelling Russia’s war of aggression in Ukraine,” says Dr Svitlana Romanko, Ukrainian environmental law expert, climate activist and founder of grassroots organisation Razom We Stand.

“If this proposal passes in Parliament, the Commission will be prolonging our addiction to gas - funding volatile dictatorships like Putin’s - and in doing so, willingly prolonging the suffering of Ukrainians.

“The choice is clear: MEPs either vote for more gas-funded wars, or learn from Ukraine and vote for a cleaner, safer, and more prosperous future.”