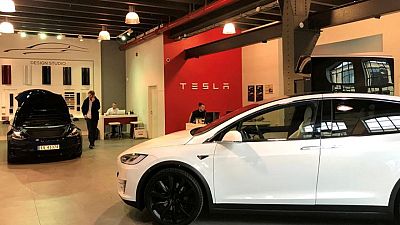 The sale of electric cars in Norway rose last year by 48 per cent, ensuring that almost two out of every three new automobiles were battery-powered and making Texas-based Tesla the top-selling brand.

Tesla grabbed an 11.5 per cent share the overall car market, making it the number one brand for the first time on a full-year basis ahead of Germany's Volkswagen with 9.4 per cent.

The Tesla Model 3 is on course to become Europe's best-selling EV.

The US automaker on Sunday reported record quarterly deliveries that far exceeded Wall Street estimates, riding out global chip shortages as it ramped up China production.

The company delivered more than 308,000 vehicles in the fourth quarter and saw deliveries surge about 87 per cent. In October, the electric-vehicle maker topped $1 trillion in market cap for the first time.

The Tesla Model 3 was the single most popular model of the year ahead of Toyota's hybrid RAV4, the sole car among the top-10 with an internal combustion engine, and Volkswagen's electric ID.4 in third place.

Shares of Tesla jumped 6 per cent in premarket trading on Monday, ahead of the first session of 2022.

Electric car sales accelerate as Europe turns away from diesel