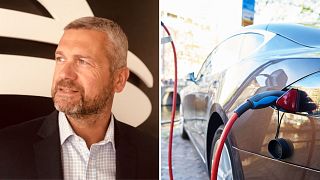 Aidan McClean, author of ELECTRIC REVOLUTION: Myths & Truths about Electric Vehicles and Climate Disaster.   -   Copyright  Aidan McClean
The opinions expressed in this article are those of the author and do not represent in any way the editorial position of Euronews.
By Aidan McClean  •  Updated: 09/04/2022

I never considered myself a flag-waving environmentalist or eco-warrior, I was simply a finance/tech businessman who enjoyed the outdoors and a keen road cyclist.

However, one fateful cycle ride on a beautiful September day a few years ago awakened a desire to find out more about air pollution as I choked on the fumes of a diesel SUV (very similar to the one I enjoyed driving myself).

Researching air pollution soon led me to learning more about climate change, a subject that had also not been previously of particular interest to me.

But the more I learnt, the more it became clear that the two linked issues are the most urgent we have ever faced as a planet - at least since that asteroid hit 65 million years ago.

A post shared by UFODRIVE - A Better Car Rental (@ufodrive)

I was inspired to get involved and make a difference, so I quit my successful career in banking and finance tech and partnered with fellow tech leader Renaud Marquet to found UFODRIVE, the world’s first all-electric, all-digital car rental company.

After putting in a lot of hard work, the exclusively electric vehicle company now has locations across nine countries (with more to come) and has saved over 2 million kg of carbon from going into the atmosphere since its inception so far.

We recently won the coveted Times Earth Ad Fund award and our e-mobility software platform has also been adopted by fleet operators including Hertz, the largest car rental company in the world.

During the first COVID lockdown, I decided to record and share the huge amount of research and experience I’d acquired and write my first book, “Electric Revolution – Myths & Truths about Electric Vehicles and Climate Disaster”.

There is so much misinformation - both deliberately disseminated and otherwise - about electric vehicles, that I wanted to find out the truth and set the record straight.

Being a technologist first, my approach is scientific, not ideological, and my research is rigorous and extensive.

So what are the facts about air pollution?

Air pollution is often overshadowed by climate change, but is a huge direct contributor to deaths and poor health all over the world. Until I did my own personal research with an air quality monitor, I had no idea of the extent we are breathing in toxic pollutants on a minute-by-minute basis.

I also looked at the impact burning fossil fuels has had on our atmosphere and climate over the last 150 years, and the critical role Big Oil has played in deliberately misleading the world about the consequences. I pull no punches in comparing Big Oil to Big Tobacco, except the entire planet is paying the price for the activities of the former.

Of course, the dominance of Big Oil was due to the explosive growth of the internal combustion engine (ICE) automobile over the last century and its transformation of our lifestyles and cities. My book includes an in-depth exposé of Dieselgate and the quashing of earlier attempts to adopt electric vehicles (EVs).

The impact of Tesla’s meteoric rise

Regardless of where Tesla will eventually sit in the future rankings of car manufacturers, the impact of its meteoric rise cannot be overstated and the technological arms race it triggered has, and will continue to, transform vehicle design forever.

The company’s reach goes well beyond EVs, with its colossal investment in supercharging stations, solar power and Power Walls all instigating a sea change in the way energy is generated, stored and used.

The largest section of my book tackles the facts and fictions concerning EVs and their impact on climate change. Topics such as “They don’t have enough range”, “Are they greener?”, “There’s not enough chargers” and “Will there be enough electricity to charge them?” are all answered in detail.

Finally, I consider the reality of charging and why the user experience as well as the availability of chargers needs to improve.

The mass adoption of EVs will just be the start of a more sustainable approach to mobility, with zero-emission public and cargo transport following rapidly. This in turn will accelerate a switch to greener methods of energy generation and the move to the zero-emission living that will be essential to halt further catastrophic climate change.

A post shared by UFODRIVE - A Better Car Rental (@ufodrive)

I hope the book will persuade the sceptical public that electric cars are the future - as well as further inform those who are already engaged in the fight against fossil fuels.