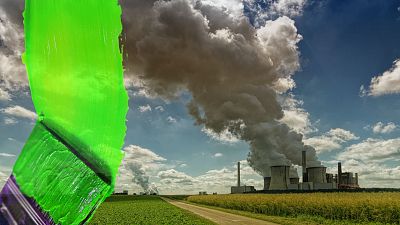 Greenwashing is used to hide companies' negative impacts on the environment, as well as to entice shoppers.   -   Copyright  Unsplash/Pexels
By Marthe de Ferrer  •  Updated: 20/10/2020

All kinds of businesses and brands are starting to use the word ‘sustainable’ in their marketing. Whether it’s a t-shirt made of ethical cotton, or an ‘eco’ car - companies are increasingly keen to showcase their green credentials.

On the surface, this is good news. The climate crisis is the biggest threat to our existence, so if corporations are pledging to reduce their carbon footprints, surely we should be celebrating?

Well, yes and no. We absolutely want to see meaningful engagement from businesses when it comes to the environment, but how can we tell the difference between real, positive commitments to change and greenwashing?

Where did greenwashing come from?

Claims of Greenwashing are everywhere. It is something even US President Donald Trump has recently been accused of as he declared himself the "number one environmental President since Teddy Roosevelt" in a recent speech in Florida.

The term arose in the 1980s after American environmentalist Jay Westervelt noted how at a hotel he visited, there were signs asking guests to reuse their towels in order to “save the environment.”

Westervelt considered the vast amount of wastage he had encountered throughout the rest of the hotel, where there were no obvious efforts being made towards sustainability. Instead, he concluded, the hotel was simply trying to reduce costs by not having to wash towels as much but were trying to market this cost-cutting ruse as eco-friendly behaviour.

Nowadays, greenwashing is taken to mean two main things. It can be when companies - usually mega corporations and sometimes politicians - try to hide or cover up their less-than-stellar environmental records with a grand, public gesture towards green causes. In an age of social media, these big PR campaigns are often criticised and scrutinised pretty quickly - as Amazon CEO Jeff Bezos found out earlier this year.

But the other type of greenwashing can be a bit harder to spot and is far more insidious. This is where companies and brands use words like ‘green’, ‘sustainable’, ‘eco-friendly’, or ‘vegan’ simply as a marketing ploy, without any deep interrogation over what those terms actually mean. And crucially - without any accountability for their actions.

Being seen as ethical drives profitability

While advertising regulators do exist, there’s no universally accepted definition of what terms like ‘sustainable’ actually mean. This means big brands can market an item as ‘green’, often at a marked-up price, without adhering to a clear definition of that term.

This is happening more and more because being socially conscious sells. McKinsey found that Gen Z (people born roughly between 1995 and 2010) are more likely to spend money on companies and brands seen to be ethical.

"More than any other generation that came before, Generation Z is more prepared to open their wallets for a brand that promotes causes about social impacts, such as climate, LGBTQ, racial or social justice," says Sertac Yeltekin, the COO of Insitor Partners, a Singapore-based, socially focused venture capital fund.

"This gives them unprecedented power to shape the success or downfall of companies. They are intrinsically aware that they can drive this corporate change."

Companies, therefore, have a financial incentive to appear socially conscious. This has led to the similar phenomenon of ‘pinkwashing’, where businesses push their public commitment to LGBTQ+ causes, usually around Pride month and often in the form of a rainbow logo.

Some countries are starting to crack down on this kind of marketing though. Norway’s Forbrukertilsynet (Consumer Authority) ruled last year that fast fashion brand H&M was under investigation for its supposedly ethical ‘Conscious’ collection.

Consumers are being given the impression that these products are more ‘sustainable’ than they actually are.

“H&M are not being clear or specific enough in explaining how the clothes in the Conscious collection are more ‘sustainable’ than other products they sell,” concluded Forbrukertilsynet’s deputy director Bente Øverli.

“As H&M are not giving the consumer precise information about why these clothes are labelled Conscious, we conclude that consumers are being given the impression that these products are more ‘sustainable’ than they actually are.”

Companies like H&M exploit the wooliness and vagueness of green terminology to both appear environmentally conscious, and sell more clothes. This is a problem, because fast fashion is one of the biggest polluters on the planet, with more than £140 million worth of clothing ending up in UK landfills every year.

Still, fast fashion is continuously being challenged by consumers - particularly in the wake of the coronavirus - so H&M’s attempt to greenwash is fairly transparent.

But some organisations who market themselves as ‘eco-friendly’ or ‘green’ are much harder to spot on the greenwashing scale.

New York-based zero-waste campaigner Lauren Singer runs Package Free, a company which claims to have “kept hundreds of millions of pieces of trash out of landfills.” But as TikToker and YouTuber Robert Tolppi highlights, there is no evidence of how these figures are quantified.

Package Free sells numerous ‘green’ products, including a three-pack of condoms in a metal tin for $9 (€8), not including delivery. There may be less plastic packaging involved, but shipping a metal tin containing just three condoms is enormously wasteful - to say nothing of the wildly inflated cost, which only serves to make environmental lifestyles seem expensive and inaccessible.

So while online shops like Package Free may appear to be a greener option on the surface, the facts just don’t add up.

It can feel exhausting trying to check every green claim or eco-credentials a brand is pushing. Fortunately, there are some brilliant online tools and search engines, such as Project Cece, Ethical Made Easy and STAIY, which help do the hard work for you.

And of course, there are also a lot of great organisations who clearly embody sustainability and environmentalism at their core. When companies engage with this ethos in a holistic manner, incorporating it throughout their supply chain, products, employment practices, and more, then you can be certain they aren't greenwashing.

Bramley, for example, is a British skin and haircare brand with green values at the centre of its operation. The company is transparent about its journey to sustainability and is innovative in its approach. Instead of contributing to a linear mode of consumption, where products are discarded, everything Bramley sells is refillable - and they even work with Bower Collective to take your empty plastic sachets, which are then washed and reused.

Another company doing sustainability differently is Roar Gill, a biodegradable alternative to Nespresso coffee pods. As well as producing excellent coffee, the team at Roar Gill is committed not just to carbon neutrality, but to continual improvement.

“Delivering a sustainable approach is core to Roar Gill's ethos,” the brand explains. “Compostable capsules, CO2 neutral roasting, and CO2 neutral capsule production go a long way to achieving this. But we are always looking to go further. Our aim is to take a wider view of carbon emissions, beyond what we do ourselves.”

If you want to order coffee from Roar Gill, you can choose for your delivery to be carbon offset, predominantly through reforesting projects in the countries where the coffee is grown.

It may feel overwhelming as one individual trying to make a difference, but if consumers keep putting pressure on businesses to be transparent around their practices, we will continue to head in an authentically green direction.