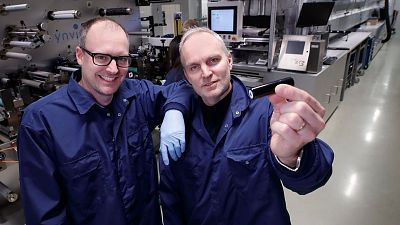 A material found in the wood of our plants is being trialled as a way to produce sustainable battery power.

Finnish designers Stora Enso have built a production facility costing €10 million that will create renewable bio-based carbon by turning trees into batteries. This will be achieved by the use of a wood-based material called lignin.

The plant is based beside the company’s Sunila Mill in Kotka, southern Finland, which employs over 150 people and specialises in producing softwood pulp, and biofuels like tall oil and turpentine.

The company is responsible for developing a number of wood and biomaterial-based solutions for everyday problems that require eco-friendly solutions. Their innovative product offerings range from mouldable woods to formed fiber food packaging.

And they are not alone, as other companies join the bandwagon too. Ligna Energy is a business based in Sweden doing the same thing with bio-batteries. Their goal? A cost efficient, safe and environmentally-friendly solution for energy storage that "promotes a global accelerated shift towards fossil-free energy production".

What is lignin and how is it formed into batteries?

Not to be confused with the Swedish berry, lignin is nature’s second most common macromolecule after cellulose, deposited in the cell wall of plants to make their structure firm and woody to prevent them from rotting. It makes up around a third of all wood’s total composition.

Stora Enso, for example, have been long-term investors in sustainable research and development funding with investments of €140 million last year. Confidence levels are high that the carbon contained within the non-toxic material can be used to replace the fossil fuels and mined metals found in our lithium-ion batteries, which usually require graphite to function.

Lignin is separated from wood during the production of cellulose fibers from its pulp. It’s then refined into a lightweight carbon powder which is made into electrode sheets and combined with other battery components in order to replace graphite.

The company has been producing lignin industrially at Sunila Mill since 2015. Their annual production capacity is 50,000 tonnes, making Stora Enso the world's largest producer of kraft lignin. Expanding lignin into its own production quarters, along with patenting the technology under the title Lignode®, cement Stora’s intentions for a future of smarter battery travel.

What are the advantages of tree-sourced battery technology?

The anode in traditional lithium-ion batteries is made from graphite which is formed through a chemical reaction in unrenewable carbon compounds.

In order for Tesla to meet its production targets of 20 million electric cars annually, it would need to mine over 1 million tonnes of graphite.

Almost all portable electronics are now powered by lithium-ion batteries. There are some concerns that engineers can’t make future commitments to them as means of powering larger machinery, such as aeroplanes, due to their capacity to overheat.

This was most poignantly evidenced by the infamous thermal overheating incident on a Boeing 787 Dreamliner’s flight from Washington to Charles de Gaulle Airport, Paris, though Boeing maintains there is no inherent safety risk to large automotive batteries used in this way.

Stora Enso believe a fully functional Lignode battery has the capacity to charge at a faster rate than the fossil-fuel powered market leader.

Lignin-based carbon could go on to be used to power everything from consumer electronics to automotive systems. The latter appears to be the company’s most pressing concern, given the exponential rise of e-mobility.

It is expected to be a large contributor to the global battery market increasing tenfold in the next five years. A panel by PwC on the topic noted that the pandemic induced a 14 per cent decline in general automotive sales, contrasted by a “outstanding growth” of 46 per cent in electric vehicles such as e-bikes and scooters globally.

It could provide excellent news for our vehicle-rooted carbon emissions, but only if the materials to make them come at less cost to our environment.

“To serve the fast-growing anode materials market, we are now exploring strategic partnerships to accelerate scale-up and commercialisation in Europe.”

Watch the video above to learn more about Ligna Energy's project.