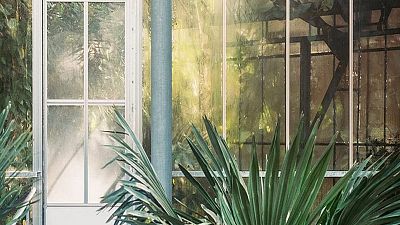 Living in a transparent house made of see-through wood may not be everyone’s idea of a dream home, but it could be a possibility in the not too distant future.

As scientists look for sustainable, green materials to build with, researchers at the University of Maryland have put wood back under the spotlight.

The team, led by Liangbing Hu, has managed to turn ordinary sheets of wood into transparent material which they say is nearly as clear as glass.

The 'invisible wood' as Dr. Hu describes it, is also stronger and lighter than glass with better insulating properties. Researchers hope it could become an energy-efficient building material.

How to make clear wood

Wood is made of tiny fibres called cellulose, and lignin, a glue-like material that bonds those fibres together to give it strength. Lignin also gives wood its brown colour and prevents light from passing through it.

Transparent wood has been made before, but early attempts involved removing the lignin using hazardous chemicals, high temperatures and a lot of time. It’s also expensive to make and the finished product is brittle.

This new technique is so cheap and easy, it could even be done in the garden.

Metre-long planks of wood are brushed with a solution of hydrogen peroxide, explains the report in the scientific journal Advanced Materials.

They are then left in the sun, or under a UV lamp for an hour. This allows the peroxide to bleach out the brown chromophores while leaving the lignin intact, turning the wood white.

The next step is to infuse the channels, or veins of planks with a tough transparent epoxy, which Hu says can be thought of as a strengthening agent.

Epoxies are commonly used in adhesives and to coat, laminate and infuse materials like wood and carbon to provide waterproofing, strength and durability.

The epoxy fills in the spaces and pores in the wood then hardens, making the white wood transparent.

A similar effect takes place when a piece of white paper towel is dipped in water and placed on a patterned surface. The white paper towel becomes translucent because the light passing through the water and cellulose fibres is not scattered by refraction.

The final product is a piece of wood that allows more than 90 per cent of light to pass through it and is more than 50 times stronger than transparent wood with the lignin completely removed.

It's also more insulating than glass and may take less energy to manufacture. Plus if it's cut a little thicker the wood would be strong enough to become a structural part of a building.

While the technology has yet to be scaled up to industrial levels, the researchers say it has great potential as a new building material.

“The transparent wood is lighter and stronger than glass. It could be used for load-bearing windows and roofs,” Hu told the New Scientist. “It can be potentially used to make a see-through house.”

The transparent wood also emits a "high optical haze" that could potentially be used in solar cells, which convert the sun's energy into electricity.

"If you place the transparent wood in front of a solar cell, the amount of light absorbed will be higher, and efficiency can increase up to 30 per cent," explains Hu.

'Invisible glass' offers new possibilities for architects and engineers, looking for greener building materials. But the question is, would you want to live in a transparent house?