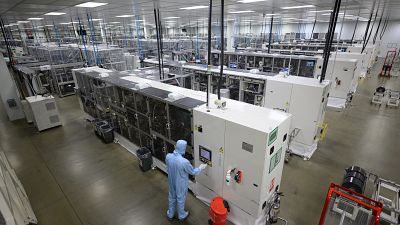 Japanese carmaker Nissan has announced plans to build a new electric vehicle and the UK's first car-battery 'gigafactory', next to its existing site at Sunderland in northeast England.

Prime Minister Boris Johnson hailed the post-Brexit investment, worth £1 billion (€1.16 billion euros) and says he expects it will create 6,200 jobs, as "a major vote of confidence in the UK".

The news comes days after Nissan's French partner Renault unveiled plans for a battery factory in France, as carmakers in Europe and elsewhere step up plans to build greener vehicles too.

Thursday’s announcement marks a turnaround for Nissan, which had threatened to leave the UK after Brexit because of concerns about increased tariffs and red tape. In 2019 the carmaker said it was abandoning plans to build sports utility vehicles in Sunderland.

Nissan's Chinese battery supplier Envision AESC will invest £450 million (€523 million) to build the battery plant that will be run on renewable energy and power up to 100,000 Nissan electric vehicles per year.

The carmaker is to spend up to £423 million (€492 million) on an all-electric vehicle, while Sunderland City Council will help to bring the total amount of investment up to £1 billion.

But an unknown factor is the contribution from the British state. Freed from EU competition rules, the UK is now able to offer financial incentives to attract investment. In 2016 the government promised Nissan up to £80 million (€93 million) of support and vowed to protect the carmaker from any Brexit fallout.

But on Thursday Nissan chief operating officer Ashwani Gupta declined to say how much financial backing the government had given the project.

"This is a landmark day for Nissan, our partners, the UK and the automotive industry as a whole," Gupta said at the unveiling of the EV36Zero project in Sunderland. He added that electrification is crucial in the fight against climate change.

Nissan said the new investment represents 6,200 jobs at the Japanese group and its UK suppliers. There will be 900 new Nissan jobs and 750 new Envision AESC jobs.

"This is a huge step forward in our ambition to put the UK at the front of the global electric vehicle race," said UK Business Secretary Kwasi Kwarteng.

"The cars made in this plant, using batteries made just down the road at the UK's first at scale gigafactory, will have a huge role to play as we transition away from petrol and diesel cars," he added.

Nissan established Britain's first electric vehicle and battery production at Sunderland in 2013 with its Leaf car.

The company has more recently faced a series of trials, from weak demand during the pandemic to the fallout from the arrest of former boss Carlos Ghosn. It delayed the planned summer launch of its flagship new electric Ariya model to this winter over the global chip shortage plaguing automakers.

Faced with a boom in electric car sales, Europe has begun repatriating battery production, but is far from being autonomous.

Some 38 plans to build battery factories are underway for an anticipated total of 1,000 gigawatt hours (GWh), and nearly €40 billion euros of investment, according to the Brussels-based campaign group Transport and Environment.

WHO: Monkeypox does not warrant being declared global emergency yet