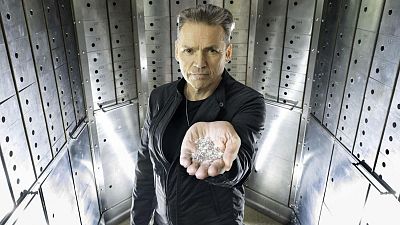 British multi-millionaire Dale Vince claims to have created the world’s very first zero-impact diamond. It is made using carbon dioxide extracted from the atmosphere.

The environmentalist and founder of green energy supplier Ecotricity first came up with the concept 10 years ago. He tells Euronews Green that he got the idea when wondering how to remove harmful carbon emissions from the air.

"It's not enough just to stop putting it in, there's already too much in the air," he says. It took significant testing over five years to ensure these 'sky diamonds' were chemically identical to those mined from the earth.

The first of the climate-conscious gems has been created in a so-called “sky mining facility” in Stroud, UK, which is powered by green energy.

Dale's concept aims to stop unethical diamond sourcing entirely. The industry causes a lot of damage to the planet from deforestation, groundwater contamination, and massive amounts of carbon emissions.

According to the company's statement, producing a one carat stone in the traditional way shifts 1000 tonnes of rock and earth - the same weight as 625 cars. It also uses an incredible 3890 litres of water, enough to make 14 thousand cups of tea and generate 108.5kg of CO2 emissions.

The environmentally-friendly diamonds are set to go on sale later this year.