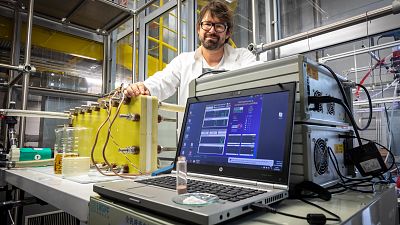 Batteries could soon be a lot more eco-friendly, after researchers discovered how to harness the unexpected power of vanilla.

Scientists at Graz University of Technology (TU Graz) in Styria, Austria have figured out a way to replace elements in liquid batteries made from heavy and rare earth metals with vanillin, the ingredient that gives baked goods their vanilla aroma.

Liquid batteries could be the answer to making renewable energy sources like wind and solar a more viable option. Lithium-ion batteries, like you might find in your laptop, phone or even electric car, don’t scale up well to the size needed to store power for entire cities.

Liquid- or flow-batteries, however, can be made big enough to store sufficient electricity to act as a backup when the sun doesn’t shine or it is a particularly still day.

The problem is that many rely on vanadium, a rare and expensive metal which is also toxic. If vanadium batteries become more common as a way to store electricity, experts worry that prices would rise exponentially which makes finding a cheaper, less toxic alternative an important area of research.

Finding inspiration in the kitchen

In a quest to find a more eco-friendly alternative, the team at TU Graz have had what researcher Stefan Spirk calls “groundbreaking success in the field of sustainable energy storage technologies”.

They found that toxic and expensive metals could be replaced with vanillin, an ingredient you are more likely to find in the kitchen than in a lab. It is the main ingredient of vanilla extract which gives cakes, biscuits - and Austria’s famous vanilla croissant - their flavour.

“On the one hand, we can buy it in the supermarket, but on the other hand we can also split off lignin with the help of a simple reaction, which in turn occurs in large quantities as waste in paper production,” says Spirk.

Turning waste from paper production into vanillin only takes mild, green chemistry using common household chemicals according to the team. This means that the production of the eco-friendly batteries could easily be scaled up without the use of expensive, environmentally damaging metals.

Spirk believes that they can generate an electricity storage capacity of up to 800-megawatt hours making an important contribution to the green energy transition.